Anntwanette Sulton knew she wanted to become a librarian by the time she was in the fifth grade.

In the sixth grade, she knew she wanted to work at the Library of Congress.

The fellowship, jointly sponsored by University Libraries and the School of Information Science, is named after 1870 Harvard University graduate Richard Theodore Greener, who, in 1873, became the first African American faculty member and librarian at South Carolina College (as UofSC was named then). Greener also graduated from law school at South Carolina College and went on to become dean of Howard University Law School.

South Caroliniana Library holds a collection of Greener’s papers, in addition to his diploma of law from South Carolina College and his license to practice in the state.

Minorities account for a small percentage of librarians. The American Library Association reports that the most common ethnicity for librarians is white, at 89 percent, followed by African American at five percent, 3.7 percent are Asian, 1.1 percent are American Indian or Alaska Native, .2 percent are Native Hawaiian or Pacific Islander and 3.8 percent report as “other.” The Greener Fellowship is one component of the Libraries’ and School of Information Science’s strategy to increase the number of minority librarians.

“Growing up, I didn’t know any minority librarians, but I loved my librarian Miss Rose at the Cayce-West Columbia Library. I volunteered there for years starting in the fifth grade. I loved the library,” Sulton says.

Sulton continued working in libraries while she completed her undergraduate degree in Library and Information Science with a minor in Early Childhood Education at UofSC. She worked at the Thomas Lee Hall Library at Fort Jackson and is currently working at the Midlands Technical College Library and the Lee Road Child Development Center.

“I held two jobs my entire four years as an undergrad. Being a full-time student with two jobs taught me time management, perseverance and discipline, all of which I hope will come in handy in graduate school,” Sulton says.

For the Greener Fellowship, Sulton will do four ten-week rotations within University Libraries, giving her exposure to four different types of work.

Next, Sulton will spend time in Thomas Cooper Library’s Collection Development department working on a project to gather, organize, streamline and report on online resource usage. Additionally, she will work on a project to assess the library’s holdings of minority award-winning authors within its collections.

Her third assignment will take place at South Caroliniana Library. Sulton will work with the Minnie Walker Johnson Papers. Johnson (1892 – 1988), an African American, owned a funeral home in Columbia, SC throughout the 20thcentury. The Johnson Collection includes correspondence, photographs and other materials related to the business.

Finally, Sulton will learn to work with rare and fragile library materials within the Frank Lee Farnell (1867-1902) Literature Collection at the Hollings Library Irvin Department of Rare Books and Special Collections. She’ll learn to handle, process and arrange the collection in accordance with best practices. She will also learn to digitize and write metadata for individual items intended for placement online.

“I’m very excited to see so many different aspects of the work that's done here, and I’m truly honored to have the opportunity to shift from patron to active participant behind the scenes. I’m getting such magnificent exposure through the Greener Fellowship,” Sulton says.

Sulton has big plans for her future, including a summer fellowship at the Library of Congress, which she will apply for soon.

“I’m compelled to become a librarian because I firmly believe that knowledge is power, that books are the basis of education, and that literacy is the key to becoming a lifelong learner,” Sulton says.

“African Americans haven’t always had opportunities like we do now, so I’m going to go all the way and get a PhD in the field. I really love education and library and information science.”

Sulton says that through her experience in multiple libraries she has seen that early literacy is less emphasized in African American communities.

“If I can be just one more voice for African American librarians, I’ll help close that gap in both diversity in librarianship and literacy. I want to see more diversity in the field, not just in terms of race, but also in terms of gender, abilities, anything that makes us different. It’s how we’re going to reach more potential readers earlier in life — through our diversity as librarians,” she says.

Additionally, Sulton is planning a literacy initiative within her own community by partnering with an established literacy organization. “My goal is to have that completed by the time I finish graduate school,” she says.

While Sulton has primarily focused on library science as a career, she also has a passion for teaching. After she receives her master’s and Ph.D. degrees, she wants to teach library science at a historically Black college or university.

“I love academia, I want to teach, and I want to work at the Library of Congress. I’m just going to have to do it all,” she says. 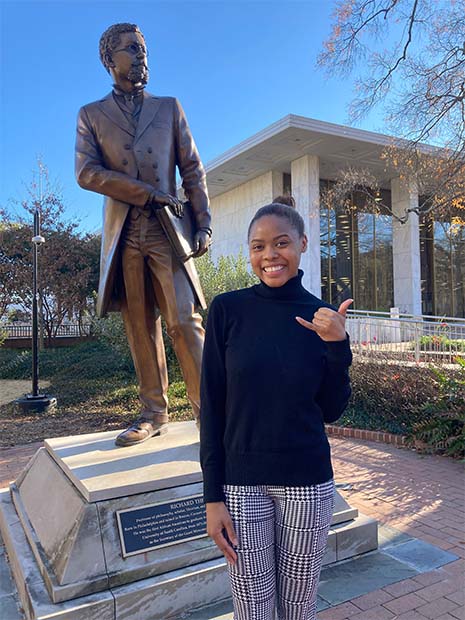