Police and Racial Bias: Lessons From the Lab For the Street

Police shootings are an often-discussed topic in the news and throughout the country. The College of Social Work’s I. DeQuincey Newman Institute for Peace and Justice spotlighted the subject for their 2018 Newman Lecture on Feb. 22 with University of Colorado, Department of Psychology Professor Joshua Correll’s presentation, “Police and Racial Bias: Lessons from the Lab for the Street.”

“I saw Joshua Correll speak at a conference a few years ago about implicit bias in police shootings, and I thought it would be a perfect social justice issue to discuss,” said Professor Ronald Pitner, Director of the Newman Institute. “He focuses on a social justice issue and takes it to a level of implicit bias, which most people do not consider. What was most interesting to me was how his research focuses specifically on implicit bias and police shootings, and the trainings he hosts for police departments.”

Correll discussed his more than decade-long research on how an individual’s race can influence a police officer’s decision to shoot. Part of his research included creating a video game involving 100 trials with police officers and community members. Each game began with a random number of background scenes appearing on the screen in a quick slide show. Suddenly, a White or Black male appeared on the screen either unarmed or armed with a pistol. Players were instructed to press a “Don’t Shoot” button for unarmed targets and a “Shoot” button for all armed targets. Participants were also asked to make decisions as quickly as possible. Failure to respond in time resulted in a message indicating the player was too slow. Regarding error rates, the results revealed participants were more likely to mistakenly fire on an unarmed target when he is Black, but more likely to mistakenly choose not to shoot an armed target when he is White.

“Even though the research showed some evidence of racial bias in police officers, it also offered some promising evidence of an ability to correct it,” said Correll. “Our research led us to teach how people can improve on the quick decision-making process, which is vulnerable to all types of unintended influences. We also wanted to show how can we can safeguard those influences and make the correct decision.”

Working with the community

Correll is hopeful some of his research can be used to help all police officers.

“The American Psychological Association (APA) has begun to think about offering guidelines and advocacy based on our research,” said Correll. “The National Academies of Science also just announced they will release a statement on proactive policing.”

The I. DeQuincey Newman Institute for Peace and Social Justice seeks to continue the mission of civil rights leader Rev. I. DeQuincey Newman by promoting social justice through interdisciplinary education, consultation and research at the local, state, national and international levels. 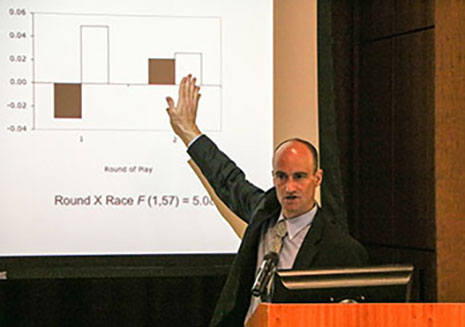 University of Colorado, Department of Psychology Professor Joshua Correll created a video game to aid in his research on how an individual’s race can influence a police officer’s decision to shoot.