The South Carolina legislative session lasts from early January to late May each year. Due to the limited time period, senators and representatives are often unable to discuss each issue and concern that affects South Carolinians. But Master of Social Work advanced year student Elouise Cram recently had the opportunity to advocate at the State House for better access to dental care.

Cram testified on October 23 in front of the Joint Legislative Committee on Children, which is chaired by Rep. Neal Collins from Easley, South Carolina. She learned about the advocacy opportunity when Rep. Collins spoke to her public health policy class at the Arnold School of Public Health.

“Rep. Collins talked to our class about advocacy at the state level. He mentioned that he was on the Committee on Children and that there would be open testimony,” Cram says. I said in a jokingly but still seriously manner that I was interested and asked if I could come. He said anybody could speak.”

Cram’s interest in population health was fostered as a public health major during her undergraduate studies at Clemson University. She wanted to turn her interest into a career that focuses on oral population health and believed social work would be the best avenue to pursue.

Cram’s current field placement is at the South Carolina Department of Health and Environmental Control, Division of Oral Health, and she wanted to speak in front of the committee on access to dental care. But since her division is only comprised of seven people, Cram believes access to dental care does not receive enough attention.

“The Division of Oral Health is small, and there are not many policies that bring attention to this issue,” Cram says. “I wanted to make the committee realize that we have significant oral health disparities in South Carolina that need to be addressed, especially with children. Last year, 51.8 percent of children under the age of eight had untreated dental decay in South Carolina, so it’s not an invisible issue anymore.”

Cram was one of 26 speakers to talk to the Committee on Children for five minutes. In addition to dental care access, some of the other topics included hate crimes, solar panels for high school, and fair youth sentencing and detention.

“I brought attention to the Medicaid reimbursement of only 30 percent for dental, which I described as ‘egregious,’” Cram says. “I talked about how ethnic minorities access to dental care is significantly lower than their white counterparts. The same disparities also exist in rural counties, so I was more poignant when bringing up that issue because many of the senators and representatives on the committee are from rural areas. My talk was primarily on access, Medicaid reimbursement and the consequences of not treating dental decay, which leads to systemic health issues.”

Cram only spoke for five minutes, but her experience helped put some of her classroom learning into a real-world focus.

“I learned there are people who care about issues as much as I care about teeth,” Cram says. “It was a little depressing though because one thing that was reiterated in my public health policy class was that advocacy through the legislation and state is a slow process. We can't improve anything if we don't work together.” 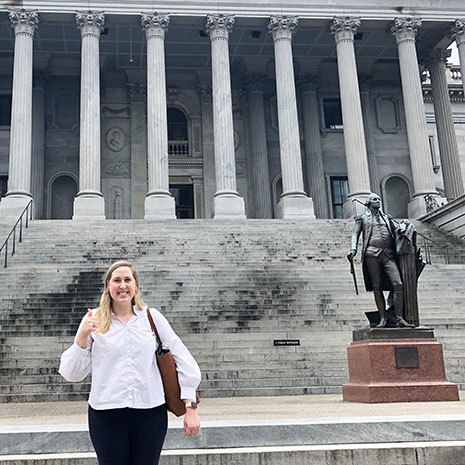 "The committee is for improving the lives of children. Since there were only a few health testimonies, mine was one of the primary health topics."