Fifty years ago in 1969, astronaut Neil Armstrong became the first human to step foot on the Moon, and the Woodstock music festival attracted an estimated 400,000 to a farm in upstate New York. At the University of South Carolina, a new college opened with 22 students and five faculty. Two students, Bettianne (Anderson) Davenport and Forrest (Hemphill) Yanke would meet as part of the first class at the College of Social Work and become lifelong friends .

The university offered a social work graduate program briefly in the early 1940s. Two decades later in 1968, the College of Social Work was established by a group from the Governor’s Advisory Board for Mental Health. At the time, South Carolina had fewer social workers per capita than any other state.  The first year of classes were held in a small, two-story house before moving to DeSaussure College a year later. The schedule consisted of two days of classes, one free day with library and research involvement, and two days of field placement.

Davenport and Yanke, whose friendship has lasted as long as the college, recently returned to the place where they first met while earning their Master of Social Work degrees. It was also the first time the pair visited Hamilton College, which has been home to the College of Social Work since 2015.

“It’s overwhelming to see the large number of students and faculty,” Davenport says. “The college has gone from 27 people when we were here to hundreds of students and three different levels of social work training. South Carolina needed us badly in 1969 and the state still needs social workers today.”

Both women took different paths to arrive at the college’s inception. Davenport earned a bachelor’s degree in psychology in 1966 from Queens University in Charlotte. Three years later, she was married, raising a son and working part-time at the Spartanburg Area Mental Health Center.

“The assistant dean of the college (Maxwell Cook) was recruiting for field placements in Spartanburg, and somehow the director of the mental health center set up a meeting between the two of us,” Davenport says. “I attended graduate school by commuting from Spartanburg, but my field placement was where I worked.”

Yanke, a native of Chester, South Carolina, transferred to UofSC from Converse College. After graduating with a degree in psychology with a minor in sociology, she worked for a year at the South Carolina State Hospital in Columbia before deciding to return to the university to pursue a graduate degree.

“I received pressure to go into vocational rehabilitation, but I was interested in psychology,” Yanke says. “At the time, the psychology department did not admit too many women. Without looking at any of my credentials or background, it was suggested that I attend the new College of Social Work, even though social work for women really did not exist.”

Davenport and Yanke were looking forward to attending graduate school. But not only were they taking a risk by attending a new school with no history or reputation, they also had little knowledge about the social work field.

Not surprisingly, the combination of a first-year school and little knowledge of the curriculum was overwhelming. In addition, of the 22 students, only five were single while the rest of the class, including Davenport, were married with children. Yanke admired Davenport’s ability to balance raising her son and commuting more than an hour to Columbia.

“What was wonderful about Bettianne was that she was able to balance raising her son, be a good mother, commute, and work towards a professional degree,” Yanke says. “I watched Bettianne and thought that I wanted to be like her when I grew up.”

“On the first day of classes, I remember seeing a table stacked high with handouts and one of the professors (Dr. Beverly) said to me, 'I want you to make this first presentation,'” Davenport says. “I was already terrified and kept thinking that if I couldn't do this, then I could always go back and be a housewife.”

Fortunately for Davenport, she remained in the program and eventually graduated with Yanke and the rest of their class in 1971. While the College of Social Work is still small compared to the other schools on campus, the combined 27 students and faculty during the college’s first year is smaller than some of today’s classes. But the small size created a family atmosphere. Davenport and Yanke remember discussions of the introverts and extraverts, who contributed the most, and curriculum discussions. These were meaningful times since students and faculty were very familiar with each other.

“The college was in the process of being accredited, and they counted on us (the students) heavily to meet with the faculty and share our feelings,” Yanke says. “In some ways, we helped form the school that formed us.”

There have been 48 graduating classes from the College of Social Work since Davenport and Yanke earned their MSW. Both women are not only thankful for their degrees but fortunate for the experience.

“I remember when my parents came for graduation, and we invited some of the professors for lunch. I didn't want to graduate because I had learned and grown so much,” Yanke says.

“We were fortunate because of the attention we received from not only the college but our field placements and the community. People were so glad for this college,” Davenport says. “It was a wonderful education, and I’ve always said that one of the advantages of an MSW is the flexibility. I've taught, was a therapist, and now in my retirement I’m involved in causes that are important to me. It was wonderful preparation for work and life.”

Both Davenport and Yanke use the principles and skills learned for work in their respective churches now.

Yanke’s first job after graduating was at the Orangeburg Area Mental Health Clinic. She eventually settled in Florida where she worked at Florida State Hospital and Catholic Charities before operating a mental health private practice for 35 years. Her daughter is also a graduate of the College of Social Work and was offered at job in Texas after graduating because of her field placement in a specific type of therapy. Davenport, who has lived in Columbia since her second year of graduate school, worked at the Columbia Area Mental Health Center and taught evening classes at Columbia College. She also had a private practice on evenings and weekends, in addition to her mental health job.

“We both decided that we wanted to do mental health,” Yanke says. “Even though the first semester was scary because we had so many research papers and everyone was new, we were impressed with the curriculum. It was the best experience, and we both loved social work and the skills we learned. Everyone in the class felt that it was a calling to be a social worker.”

It has been 50 years since Davenport, Yanke and their 20 classmates became the first students to attend the College of Social Work. Even though the professors and location of the college have changed, social work values remain the same. Social work is based on Judeo-Christian values with human life and dignity at the forefront.

“My advice to students today is to answer the call to live out your values by understanding people and their needs,” Yanke says. “One-by-one, we can change the world by helping someone see themselves in a positive way or challenging them to move beyond their current situation to where they envision themselves.”

“Social work is still focused on helping people, whether it's an individual, family or community,” Davenport says. “The advice I would give students is to hold on to your values. When I graduated, I thought I was going to change the world. But I eventually realized that it’s important to have purpose and drive and not to be discouraged. It's important to be grateful for this school and that social work will be your career because it’s a tremendous blessing.” 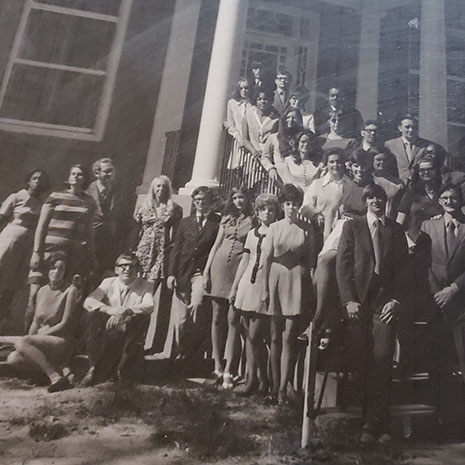 A framed photo next to Hamilton 227 displays the first 22 students and five faculty members who were at the College of Social Work's inception in 1969.