The U.S. Immigration and Customs Enforcement reported in November 2017 that the average daily population at immigration detention centers for fiscal year 2018 was 39,322. Last week, Master of Social Work students in Assistant Professor Benjamin Roth’s immigration policy class visited and spoke with individuals at an immigrant detention center in southwestern Georgia. They also toured at a nearby home to serve detained immigrants, families and friends.

Located two hours southwest of Atlanta, the Stewart Detention Center in rural Lumpkin, Georgia is one of the largest immigrant detention centers in the country. The facility houses more than 2,500 detained immigrants awaiting deportation and asylum proceedings.

But according to Roth, the Stewart Detention Center illustrates some of the problems with the country’s immigration system. He explained that detainees  have difficulty securing legal counsel and often wait weeks or months before their case is decided by the immigration court located in the facility. Moreover, data has shown that asylum-seekers at Stewart are granted legal relief at a lower rate relative to immigrants in courts at other facilities around the country.

Roth added that CoreCivic, a private for-profit company which operates the center, promised more than 500 jobs to Lumpkin when the facility opened in 2004. All jobs required a high school diploma, but until recently the graduation rate at the local high school was less than 50 percent. The center remains understaffed with only 350 employees.

“The problem of immigrant detention is expansive, yet virtually invisible to the public,” Roth said. “The global diversity of the detainees at this facility in tiny Lumpkin, Georgia present a striking contrast that is largely hidden from view in rural Georgia.”

Students met with detained immigrants from Central America, North Africa, and Asia. According to Roth, his students left the center with a clearer understanding of immigrant detention injustices.

“Some of the individuals at Stewart are asylum seekers. Others have lived in the U.S. since they were little and have not been charged with a crime,” Roth said. “All of them are waiting indefinitely with minimal contact with family members or anyone from outside the facility. As one of my students observed, it operates as a sort of internment camp.”

MSW student Brittany Fuchs learned how the isolation of the Stewart Detention Center creates a significant barrier for detainees and families.

“The nearest city is Columbus, Georgia, which is 40 miles away. There are no hotels and one restaurant which is closed on the weekend in Lumpkin,” Fuchs said. “The individual I visited explained how detention felt like a nightmare. It is very difficult to walk out knowing that I have my freedom and a safe place to live while the people at the detention center have almost a 90 percent chance of being deported."

Roth and his students also visited El Refugio, a hospitality house in Lumpkin that offers free meals and lodging to families and friends of immigrants housed at the Stewart Detention Center. The house provides transportation for individuals and groups to the detention center (detainees are only allowed one 60-minute visit per week). El Refugio also conducts educational outreach to increase awareness of immigrant detention and advocate for justice for immigrants.

“Activists and organizations are making a difference,” Roth said. “In addition to El Refugio, the Southern Poverty Law Center has a trailer home in Lumpkin where staff attorneys live and provide legal representation for the growing number of individuals at Stewart.”

Fuchs said visiting the Stewart Detention Center and El Refugio solidified her belief that social workers must be willing to advocate for everyone’s human rights.

“This experience was a good opportunity to see something first hand what we hear about in the news and discuss in class,” Fuchs said. “It put a human face to the story.” 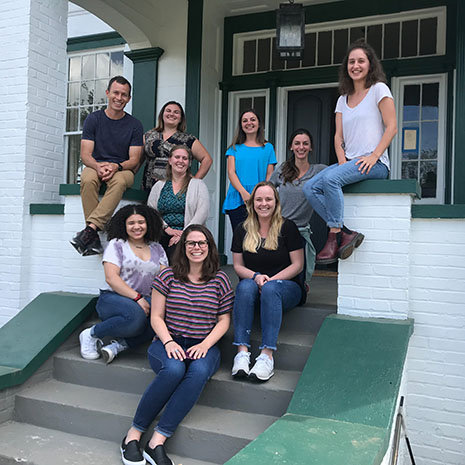 Assistant Professor Benjamin Roth and students from his immigration policy class are pictured at El Refugio, a hospitality house for family and friends of detained immigrants. (Photo credit Brittany Fuchs)