Sometimes the simplest statements can have a significant effect on people’s decisions. For Master of Social Work Advanced Standing student Hayley Graff, a simple statement changed her educational pursuits and brought her to South Carolina.

Graff, a native of Sudbury, Massachusetts, was initially a communication sciences and disorders major as an undergrad at James Madison University in Virginia.

“One of the professors asked me why I wanted to be there, and I said, 'I want to help people.' She told me that I can do that in other degrees, and I thought, ‘Yes, she’s right,'” Graff says. “I started exploring minors and decided on a family studies minor in the summer prior to my junior year.”

But a military families study course, which was within the social work department, convinced Graff that social work was her path. She enrolled in some social work classes in the fall semester, and the core values of the program and profession made her decision easy. She eventually declared social work as her major in November.

Graff also expressed an interest in graduate school and working with veterans and military families. One of her social work professors mentioned the graduate certificate program in Social and Behavioral Health with Military Members, Veterans and Military Families at the University of South Carolina College of Social Work. This was also convenient because Graff’s sister is an undergrad student at South Carolina. She researched the program, visited the campus and was accepted. Graff began the Advanced Standing MSW Program only a few weeks after graduating from James Madison. While consolidating two years of studies, field education and a graduate assistantship into only 11 months and now having online learning due to the COVID-19 crisis, she is grateful for her relationships at the college.

“My favorite part of the college has been the people (students, faculty) I’ve met throughout my time here. The availability of the faculty has been especially helpful,” Graff says. “I've met with Professor (Rhonda) DiNovo on multiple occasions to go over assignments, and Dr. (Margriet de Zeeuw) Wright has been a great asset. The relationships are also one of the reasons why I decided to stay in Columbia after graduating.”

Going from in-person classroom studies to online learning is not the only challenge Graff has faced this academic year. She began her field placement in August at the Alston Wilkes Society, a non-profit organization in Columbia that provides rehabilitation and support services for veterans. But her supervisor, who was the only social worker at the facility, left for another job. Graff worked with Assistant Director of Field Education Jennifer Bosio-McArdle, who found her a new placement at Heart of Hospice. Even though she aspires to work with veterans and military families, Graff enjoyed being pushed to perform tasks she might have been previously uncomfortably doing, such as home visits.

“Doing home visits was something I never thought about or would have done in my previous field site. Even though I wouldn’t have pursued a job with that aspect, it’s better to have an experience that pushes me out of my comfort zone,” Graff says.

Most people unfamiliar with social work have incorrect assumptions about the profession. This once applied to Graff, whose extent of her social work knowledge was limited prior to changing majors.

“The versatility within the field and the range of possibilities with different populations is more vast than I could have possibly imagined,” Graff says. “The general concept of social workers taking away kids and not making money steered me away from finding the path sooner because that was always how it was explained to me. Even when I went to the career center to pick a new major, I saw social work and didn’t think it was for me. But then I took classes and realized that this was exactly what I want to do.”

As someone who initially did not study social work, Graff recommends that anyone interested in studying and working in the field should look beyond the misconceptions and do their own research. This will help students understand that social work has a variety of avenues that someone can explore.

“It takes a certain kind of person to be a social worker. This is not something that everyone can or is willing to do,” Graff says. “Helping people and making sure everyone has opportunities to get where they want to go is what drives me. Evaluating and prioritizing what you see is important before going into the field. Someone in my undergrad program had a sticker on their laptop, ‘In it for the outcome, not the income.’ It's a slogan that’s accurate for social work.” 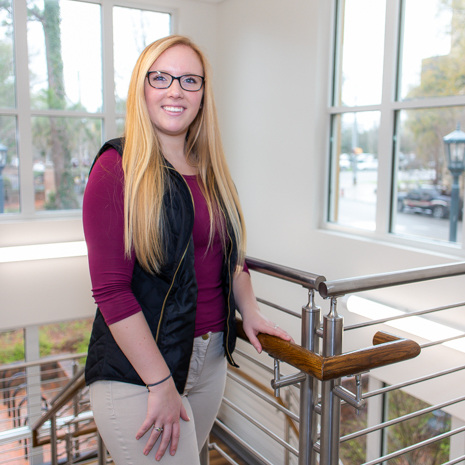 “It takes a certain kind of person to be a social worker. This is not something that everyone can or is willing to do.”