A life-changing experience does not usually occur during lunch breaks. Eating, reading, taking a walk or running errands are some of the activities during the one-hour reprieve. But one former student used a lunch break to create a Facebook group that has become a support and networking organization for black social workers.

Alum Bodequia Simon, LMSW, BSW ’17, MSW ’18, was excited to enter the social work field after receiving her graduate degree. While her first job was great for experience, she was not happy and felt unfulfilled in her work. She was also anxious and feared being stuck in her job without knowing the next steps for advancement or a new job.

“I worked in a space that was filled with a majority of black women with social work degrees who were older than me,” Simon says. “Even though they had more experience, they were also stuck in trying to figure out their next steps. I also sought advice from my classmates and the majority that responded were black women. They were also stuck and not able to find advice for the things they were experiencing on how to accomplish their goals.”

Instead of continuing to be frustrated, Simon took the initiative and created the Facebook group, Black Girls in Social Work, during her lunch break on Aug. 1, 2018. The group was initially created to provide support and networking for black women pursuing or working in social work. But in only two years, the group has grown to more than 19,000 members nationally and expanded to include projects, meet ups and luncheons.

“I didn't have any expectations when I created the group. The goal was to have a place where members could bounce ideas off one another,” Simon says. “I was overwhelmed that first week when so many members joined from different locations around the country.”

Simon has since moved on in her own career and now works as a medical social worker at Greenville Memorial Hospital. But as Black Girls in Social Work’s membership grew, so did the activities and resources available. One of the programs is monthly self-care meet ups that are available in 35 locations across the country, including Columbia, New York, Chicago and Dallas. Each meet up is facilitated by a state representative, who are brand ambassadors and represent the group in offline spaces. Due to COVID-19, all meet ups are now virtual.

“Self-care meet ups help prevent burnout in the field,” Simon says. “We also use it as a networking opportunity. It turned into something that I did for myself but ended up being much bigger than me.”

One of the most successful events organized by Simon and the group was the first Lunch with My Goalfriends, which was held in Columbia in June 2019. Simon created the event to be an intimate space where members could empower one another and share their goals. The guest speaker was Janay Price, Founder and CEO of Premier Counseling, LLC in Columbia, who Simon had met as an undergraduate student. She was the first black woman Simon met who owned her own private practice.

“I didn’t know that it was possible for a social worker to own their own private practice, so it was empowering for me to meet her,” Simon says. “That engagement inspired and pushed me to create a vision for myself. Our talk was what I had in mind when I created Lunch with my Goalfriends.

I wanted to do an empowerment lunch for members where we talked and had a speaker who presented her story in social work. The goal was to show members that we can work in spaces where some may not think its attainable. I came up with the name, Lunch with my Goalfriends, because I wanted it to be an intimate space where we empower each other to talk about our goals.”

The While She Moves Forward Project is another idea Simon has developed for Black Girls in Social Work. While the project is still in the development stage, it aims to offer emergency assistance for members experiencing financial difficulties. Simon created the project after a member with an MSW in the Columbia area posted to the Facebook group that she was living in a transitional homeless shelter with her small child and was eight months pregnant. She was seeking advice on resumes and building interview skills to help her find a job.

“She owed money to the shelter because there is a small fee for families and was also behind on paying for her daughter’s day care,” Simon says. “With her permission, I reached out to our state representatives and let them know that we had a member who is having a hard time and how I would love to collect money to assist her. We raised $900 in one day and paid her transitional housing fees and her daughter's day care for two weeks. I also bought groceries and other supplies. That moment put everything into perspective on how when we think we have it all, life’s struggles can happen anytime.”

Black Girls in Social Work has allowed members to network and participate in a variety of activities. But Simon is most proud about creating a space where black women can be vulnerable.

“It's very hard for a black woman to be vulnerable in front of other people, especially other black women, because it's a deep-down feeling of needing to be perfect according to society,” Simon says. “I felt the same way of not wanting to be vulnerable and afraid of telling people of what I was experiencing in order to get the advice and feedback that I needed. It’s great having this non-judgmental space and seeing black women be freely vulnerable to share their stories and provide feedback.”

The Black Girls in Social Work Facebook page is a closed group. But after requesting to join the group and meeting membership criteria, members may attend self-care meet ups and have access to mentorship, job and internships leads, and the opportunity to share accomplishments, advice, and feedback. Upcoming plans for the group include creating collegiate sectors, more Lunch with my Goalfriends, and continuing education unit classes in select locations. 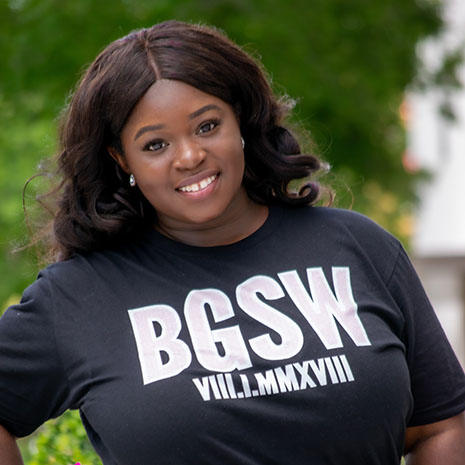 "It’s great having this non-judgmental space and seeing black women be freely vulnerable to share their stories and provide feedback.”