Quinn Brandt never imagined attending the University of South Carolina upon graduating from high school. The native Canadian began her collegiate studies and athletic pursuits in the U.S. Southwest. But an unexpected decision at her first school and her mother’s advice eventually brought her to the College of Social Work.

Brandt was always interested in horses and the sport of equestrian while growing up in Blumenort, Manitoba, Canada. Years of practice paid off when she represented her home country on the national equestrian team for two years. She had a friend on the equestrian team at New Mexico State University, where she earned a scholarship to begin her collegiate studies and student-athlete experience in Las Cruces, New Mexico, more than 2,500 miles away from her hometown. But after two years, the equestrian team was eliminated as part of athletic department budget cuts. This opened the door to transfer nearly 1,700 miles east to the University of South Carolina.

“Everyone on the team was told that we could either stay and keep our scholarships or transfer,” Brandt says. “I came here (UofSC) on an official visit and loved the campus and coaches and ended up transferring. The adjustment was hard but worth it. Thankfully, one of my teammates from New Mexico State transferred with me because doing this alone would have been more difficult.”

Brandt started as a kinesiology major at New Mexico State. But since kinesiology was not offered at South Carolina, she switched to public health with a minor in psychology. Brandt knew she wanted to attend graduate school but could not decide on an area of study. But her mom, who works as a public health nurse, helped steer her towards social work.

“I considered a graduate degree in public health or psychology before my mom told me that I should consider social work. She said that it integrates everything and provides a more holistic view,” Brandt says. “Even though I wasn’t sure about social work at first, it worked out because I was accepted into the (master’s) program and got another year of eligibility on the equestrian team during my first year. I've enjoyed all parts of social work, including the holistic view and mental health. Seeing people holistically is when you start to see healing.”

“Social work was something I had a little knowledge of but not to the extent of what it really is,” Brandt says. “I've learned a lot since starting and educating people that social work is important everywhere. I think social work can still be incorporated in even more areas to help people with trauma, mental illness, and other conditions.”

Anyone who has participated in athletics will likely say that teamwork is one of the greatest lessons. Brandt learned this lesson from equestrian and is already applying it in her field placements.

“Our team was big with about 40 people, so working with different personalities and people you may or may not get along with all the time forced me out of my comfort zone at times. This has helped me going forward, Brandt says. “I realize that I'm not going to get along with everyone all the time in my field placements and that's okay. But you must make it work somehow to get the job done.”

Brandt aspires to work in a mental health setting. While her initial field placement this academic year at the Bryan Psychiatric Hospital was cancelled due to COVID-19, she currently interns at Three Rivers Behavioral Health. After graduating next spring, she is interested in working in a prison setting. 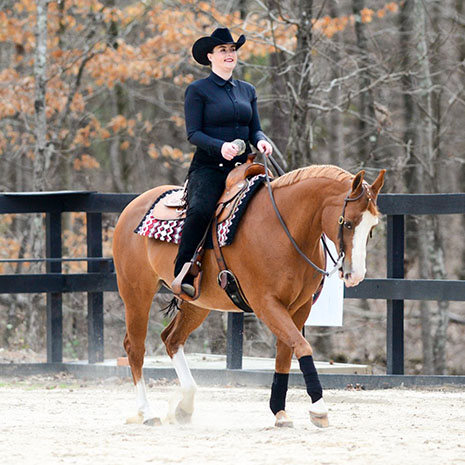 Quinn Brandt was a member of the UofSC equestrian team for three years. Her final season last year was also her foundation year in the MSW program.