Military life can be stressful for servicemembers and their families. Whether working with active duty personnel, military families or veterans, social workers are positioned to serve in numerous capacities, including social services, housing and health care. For one advanced year Master of Social Work student, her interest in serving the mental health needs of servicemembers and veterans was heightened by an experience in a foreign country.

During her undergraduate studies at the University of South Carolina, Atlanta native Carin Cushenberry studied overseas during the 2016-17 academic year. She majored in psychology and was interested in mental health, especially in working with active military and veterans. Cushenberry was studying abroad when she spent two weeks in New Zealand traveling with her cousin’s fiancé, who is a Navy Seal. This was where she learned more about the Veterans Administration, Post-Traumatic Stress Disorder and the mental health issues of veterans upon returning home.

“My grandfather was a colonel in the Air Force and talked about some of the mental health issues he saw. But he never displayed any of the symptoms, especially after the Vietnam War,” Cushenberry says. “My cousin's fiancé talked about how the VA needs help and how it starts with the people who work there and are willing to put in the effort for the veterans. Just having that conversation and learning how the VA has helped so many but still needs improvements made me want to go in that direction.”

Cushenberry also learned how the intensity and most of the skills in the military are not useful in civilian life. The military trains soldiers and once they return to civilian life they are expected to fit in naturally. But the transition is difficult. She researched the different programs at the VA, but it was not until she returned to Columbia for her senior year that she learned how working with military populations and social work could be a future career choice. Cushenberry began volunteering at the Department of Juvenile Justice, a decision that changed her future educational and career course.

“I originally applied for the educational specialist (master’s) degree to pursue a career in counseling, but one of the social workers at DJJ said that I needed to look into social work,” Cushenberry says. “I bought the stereotype that social workers only worked in social services. But the more I researched, I realized the versatility of social work and how I could do more than I realized.”

Cushenberry graduated early in December 2017 and eight months later began her Master of Social Work studies. She also embarked on earning her graduate certificate in social and behavioral health with Military Members, Veterans and Military Families. The certificate program was a major reason for staying at Carolina to earn her MSW.

“I was told that any extra specialized education for military populations will help me in the long run,” Cushenberry says. “It's been a great decision because of the base of knowledge I’m receiving and learning about areas specific to the military population.”

Cushenberry’s passion for working with military and veterans is evident in her current field placement. She interviewed at the VA Medical Center in Charleston and was placed at their outpatient clinic in Savannah, Georgia. Even though her field placement is three days a week at a location nearly three hours from the Carolina campus, Cushenberry manages the long commute and believes she is getting the most ideal real-world experience.

“I’m experiencing different programs at the Savannah location since it’s general mental health,” Cushenberry says. “When I interviewed in Charleston, they said I would be involved in the entire clinic, including seeing patients in therapy sessions, so it’s more of a general view instead of only working in one department.”

The commuting can be tough, but I have friends in Savannah, and I’ll stay overnight down there. It's been difficult at times to plan my field hours and take classes on certain days. But the field placement is worth it and makes the commute tolerable.”

According to Cushenberry, the most impressive part of the field education component is experiencing real world issues from the inside. For example, she spoke with a Vietnam War veteran seeking initial mental health treatment for issues he had dealt with since he was 10 years old. In addition, the VA provided her the opportunity this past fall to attend a three-day conference at Fort Stewart in Georgia on military mental health issues and experiences.

“The VA’s offering in mental health treatment has expanded. The negative stigma still exists but it’s decreasing,” Cushenberry said. “It’s great to see how veterans receive help, no matter how long they have had mental health issues. I enjoy meeting these veterans who are respectful and caring for one another and their country. It's an amazing experience to work at the VA and see the gratitude of clients for their services.”

Cushenberry also said that research from Associate Professor Nikki Wooten and others have helped her better understand everything she has learned in the classroom and at the VA. Wooten’s research interests include substance use and psychological problems in active military and veterans, and gender differences in military behavioral health.

“Just doing literature reviews in classes has been very helpful,” Cushenberry says. “I was interested in military sexual trauma this past summer and learned how it’s underreported, and met patients suffering from that experience. Military research discusses the best way to talk to someone and ask questions, which I can apply at the VA.”

Cushenberry aspires to work at a VA clinic after graduating this May. The combination of classroom studies, the military graduate certificate program and field education has positioned her to pursue a fulfilling military-related career in social work.

“We would talk about an intervention in my military classes. The next day at field my supervisor would discuss an intervention and I thought to myself, 'I just learned this in class yesterday,’” Cushenberry says. “Seeing how much knowledge I'm learning and how the field experiences are aligning has been great because I can apply everything in the classroom and real-world settings. I learn best from experience, but I would not be where I am now without social work classes.” 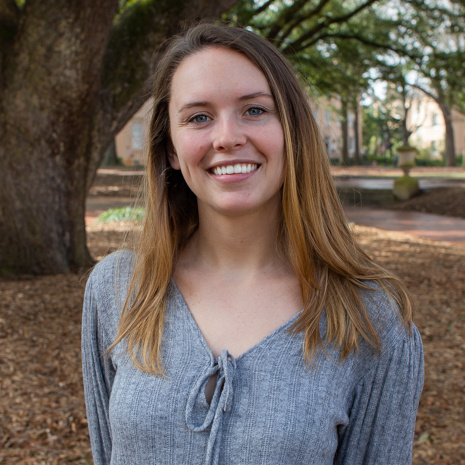 "Carolina was not on my radar when I was applying for graduate school. When the time came to decide, I chose Carolina, and from day one, I knew this was the place for me."