Last year, Associate Professor Robert Hock taught two classes as part of the college’s Korea-based Master of Social Work program. He once again traveled abroad earlier this year with his family during his sabbatical in Australia.

Hock was in Australia from January to mid-April and had the opportunity to enhance his research with a Visiting Researcher position at the Royal Children’s Hospital in Melbourne, which is Australia’s second-largest city. He worked with Rebecca Giallo, a senior research fellow at the Murdoch Children’s Research Institute, whose research focuses on promoting the health and well-being of children and families.

“Dr. Giallo and I worked around shared research interests in parenting interventions,” Hock says. “They were evaluating three innovative parenting interventions, and we were able to share ideas across our programs. It was a great opportunity to work with her and her team. I also learned a great deal from working alongside the entire Intergenerational Health Research Group. This was the first time I worked in a research-only environment, and it was nice to focus exclusively on research activities.”

Hock, whose research interests include the treatment of families with children diagnosed with autism spectrum disorder, and family-centered service systems, did several research talks, including one at La Trobe University on parenting interventions for children with autism. He also worked with Giallo on a scholarly article about co-parenting and longitudinal parent outcomes among Australian children.

“It was a time of inspiration and to develop new ideas,” Hock says. “Working in the hospital every day helped me reconnect to my passion for helping families. I met with physicians who were treating children with autism and their families. I also went on rounds with developmental behavioral pediatricians and sat in the rooms as they treated children and families.”

Hock also learned about some significant differences in service delivery systems in Australia for children with autism and their families.

“Australia has some very different policies and ways of funding services that I thought were interesting and worth exploring in the U.S.,” Hock says. “It helped me reflect on what is working and not working in our system. But aside from funding, there were more similarities than differences with autism regarding the issues families are facing, and the cultural context of some of the symptoms and how they are interpreted.”

Hock’s sabbatical allowed him to generate new questions and focus on the latest research in his area, especially related to interventions.

“The work I do is intervention related, so it intersects and is closely related to service delivery systems,” Hock says. “I'm interested in exploring some of the ways we deliver early intervention to children who have developmental concerns and which systems are used to offer services.”

Hock’s wife and three children joined him in Australia. His children went to school, which is completed in quarters, not semesters, and witnessed the differences in how schools operate between Australia and the U.S.

“I saw my kids adjust and adapt to a very different school day. One of the biggest differences was that it was a more kid-friendly schedule with more time for physical activity, rest and lunch,” Hock says. “I am proud of my children and how quickly they adapted. Even months later, they are still messaging their Australian friends and teachers.”

While the Australian bushfires at the beginning of the year did not affect Hock and his family, he was forced to cut his sabbatical short by two weeks in April just as Australia moved to close its borders to countries with high infection rates.

“I was forced to work from home my final week in Australia as they were prepping the hospitals for COVID-19 screenings. Otherwise, life continued as usual,” Hock says. “It still felt normal by the time we left, which made it harder for us to leave because there were no signs around us that life was changing. But I'm glad we came home when we did because they canceled all international flights three days after we left.”

Even though his Australian experience was cut short by two weeks, Hock treasured the experience of enhancing his research while spending time with his family in another country.

“We created some lifetime memories, and I established some working relationships and tracks of research that I will continue in the future with Dr. Giallo and others,” Hock says. “I feel a renewed sense of excitement about my scholarship and teaching.” 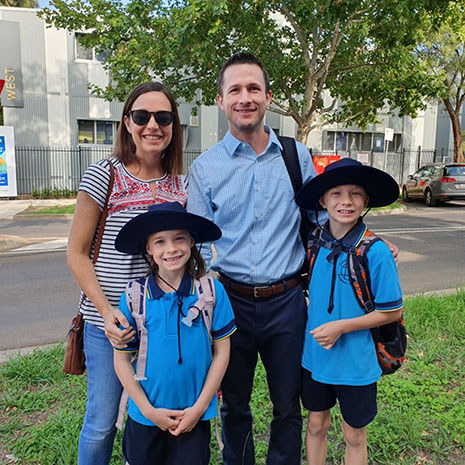 “We created some lifetime memories, and I established some working relationships. “I feel a renewed sense of excitement about my scholarship and teaching.”