The Strong Bond of Friendship Through Support and Encouragement

Bettianne Davenport and Forrest Yanke were two of the first 22 students at the College of Social Work’s inception in 1969. They met during their graduate studies and remain friends more than 50 years later. Caroline Ambrose and Erin Woods both earned their Master of Social Work degrees this year. But unlike Davenport and Yanke, their friendship has deeper roots.

Ambrose and Woods first met in a sixth-grade school newspaper class at Riverside Middle School in Greer, South Carolina. A friendship that began more than 10 years ago continued through middle and high school, as they were in several classes together and participated in student government.

“We had similar values before we both became social work majors,” Ambrose says. “In our own ways, we are both Type A, outgoing people.”

As their high school graduation approached in 2015, Ambrose and Woods wondered if their friendship would be separated by distance, since both originally intended to attend schools other than the University of South Carolina. But one of their mutual family friends was responsible for ensuring distance would not interfere with their friendship.

“I didn't know what I wanted to do throughout high school, but I knew I wanted to work with helping people,” Ambrose says. “We have a family friend (Amy Bowers) who is pediatric oncology social worker at the children’s hospital in Greenville. I started talking with her about her job and became interested.”

“I always thought throughout my childhood that I wanted to go into nursing or teaching. I didn't know about social work as a profession, so we were lucky to talk with our family friend,” Woods says.

It was not until March of their senior year that Ambrose and Woods decided to attend South Carolina and study social work. Their decision was made easier thanks to their personal connection to a social worker and the welcoming environment of the college.

“We were lucky to be exposed to the profession before starting, otherwise we would not have known to apply to this major,” Woods says. “The program wrapped around us, and we both walked away feeling cared for and valued from the beginning. Our families and us met with the former dean (Anna Scheyett) and Rushondra James (from Student Services), and they really cared about what we said.”

Ambrose and Woods were not only attending the same school with the same undergraduate major, they were also roommates during their freshman year. While they scheduled classes together, it was always nice for each other to return to their room and see a familiar face. They joined different sororities and lived apart for the rest of their undergrad but always saw each other in classes. Last year, they were reunited and lived together again this academic year during the 11-month Advanced Standing program. Helping one another is something they have done many times since their friendship began in middle school.

“The only tough time in our freshman year was my alarm going off early since Caroline is a morning person and I’m not,” Woods says. “Caroline is bolder than I am, and she’s encouraged me to do things that I was initially hesitant. We're both high-energy, so we've had to build off each other since we're both extroverted.”

“If people were to describe us before entering the social work program, they would say we're both caring and love to help others,” Ambrose says. “Our passions are to serve others and love them, both personally and professionally.”

The sense of being a valued student that Ambrose and Woods felt when they first visited the College of Social Work remained with them in undergrad and graduate studies. While students in some other academic units may have larger classrooms and more opportunities, Ambrose and Woods have always appreciated the small class size and close-knit family atmosphere of the college.

“We always seemed to be selected together whenever we did a role play in class and probably laughed more than we should have,” Woods says. “We wanted a big school experience, but it's nice to feel known and valued as students and connected to our professors in a small program.”

“Our families were at our undergraduate reception at the college last year, and they were both blown away by how much our professors knew and cared about us,” Ambrose says. “Even though South Carolina is a big university, the social work program makes a big school feel small.”

Ambrose and Woods have graduated together from high school, undergrad and graduate school, and their strong friendship shows no signs of ending. Even during these unprecedented times of social distancing, nothing will come between their friendship and support for one another.

“I couldn't have completed everything without Erin. Her friendship is priceless and means the world to me,” Ambrose says. “Erin puts everybody else before her. She has always been there for me, foresees my needs better than myself and supported me in ways in ways I did not even know. It is been great to be friends throughout and deal with everything that comes with college, academics and life. It will be hard not living together anymore after we graduate. I don't like thinking about it but when it does happen it will be hard and feel different.”

“Whenever I would stress about school or my workload, Caroline was always the first person I texted because she understood what I was going through,” Woods says. “We have learned so much about ourselves and are each other's biggest cheerleader. Going from school to a career will be one of our biggest life transitions, but we will always stay in touch and find new ways to support one another. I have no doubt our friendship will last for the rest of our lives.” 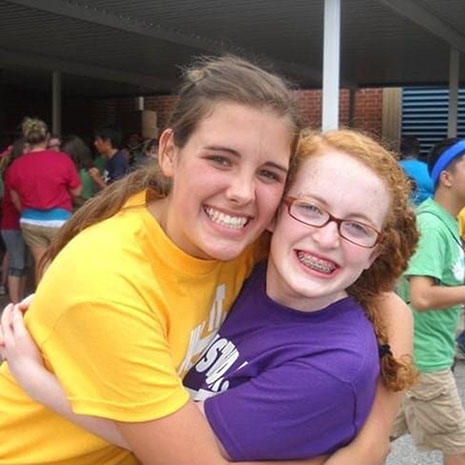