Affordable housing is a personal issue for MSW student Savannah Baker. Growing up in Fairmont, West Virginia, her family was evicted and homeless for three months. Later, she struggled to find affordable housing while attending West Virginia University and living in Portland, Oregon. Based on her previous experiences, it should not be a surprise that her current field placement is at Central South Carolina Habitat for Humanity. Last month, Baker had the opportunity to participate in a national conference to advocate for affordable housing.

Baker was one of 20 students nationwide selected for the Emerging Leaders Scholarship. The award included a trip to Habitat for Humanity International’s annual legislative conference, Habitat on the Hill, from February 10-12. The three-day conference brought together Habitat homeowners, staff members, volunteers and supporters from around the country to unite as advocates for safe and affordable housing.

On the first day of the conference, Baker and the other emerging leaders participated in an advocacy accelerator, an in-depth training focused on bringing advocacy tools to campuses and Habitat chapters. Other topics included having participants and clients tell their stories while advocating on the political level. The second day included a talk by NBC News Kelly O’Donnell on remaining bipartisan in sharing beliefs and passions while engaging with politicians. Baker also attended several workshops, including “Elections 2020: Ensuring Housing is on the Ballot,” and a data-driven advocacy training.

“A speaker from Nonprofit VOTE talked to us on not only engaging people to vote but telling them about the issues that nonprofits face and how they can share their voice when voting,” Baker says. “The data-driven advocacy training showed us how to use GIS software to make maps and show where the housing affordability crisis is based in a city and use it to my advantage. Sharing a story is important, but the data supports the stories.”

The talks and trainings of the first two days prepared emerging leaders for the final day of the conference, when they went to Capitol Hill to talk with elected officials and their staff. Baker and others talked about legislative bills that Habitat for Humanity International supports, such as the Neighborhood Homes Investment Act, which would create a new federal tax credit for producing new equity investment dollars for developing and renovating houses in distressed neighborhoods. But Baker was most impressed by a personal story from a Habitat homeowner who recently paid off her mortgage.

“A woman from the Greenville affiliate told her story of how she was a single mother with young children who was struggling to pay rent and could not afford a home,” Baker says. “She applied for the Habitat program and completed over 200 hours of hands-on work, which included trainings, workshops and financial literacy, before moving into her new home. She stared the legislators in the eyes and said, 'If you had to choose between a home or paying medical bills, which would you choose?' It was a powerful moment.”

Habitat for Humanity International’s advocacy efforts are part of the five-year Cost of Home Campaign, with the goal of home affordability for all. This includes neighborhood revitalization, access to affordable lands and helping individuals obtain credit for a home.

“Having an affordable home connects to other issues, such as healthcare and children's welfare,” Baker says. “I've seen people come into the program where they are constantly moving from homes they cannot afford. Their rent is high with low incomes and climbing healthcare and childcare costs. If someone can't afford childcare, how can they go to work? All issues touch on affordable housing. I knew that going into Habitat but being there and seeing it first-hand has been incredible.”

Baker has enjoyed her time working and advocating for Habitat for Humanity. She has learned all aspects of the organization, such as erasing the myth that Habitat just gives homes to clients. Instead, all clients must complete a two-year program before moving into their home. According to Baker, this is more impactful and provides more of a sustainable change. Her personal experiences have also helped her advocacy efforts.

“I always reiterate that the most important part of advocacy is telling your story,” Baker says. “Everyone has a personal story with home affordability, whether they have been fortunate to never have experienced homelessness or struggled to pay rent, or if someone has struggled with housing their entire life. We all have a connection to a story, so leveraging that is important when trying to empower others.”

Baker’s work has not gone unnoticed by her supervisor and others. For example, her advocacy work has built a foundation for empowering clients and continuing the impact work of Habitat for Humanity.

“Savannah has been a wonderful asset to Habitat for Humanity this field year. Her passion for helping those in need is easy to observe through her work and understanding of systemic limitations,” says Emily Fernald, Central South Carolina Habitat for Humanity’s Homeowner Services Director. “During her year, she has been developing our advocacy program, something that has been neglected, but needed for so long. Her work will empower our clients to tell their stories in ways that will not only affect the agency’s ability to positively impact affordable homeownership in the Midlands, but give them the strength and self-reliance to further believe in themselves and what they can accomplish.” 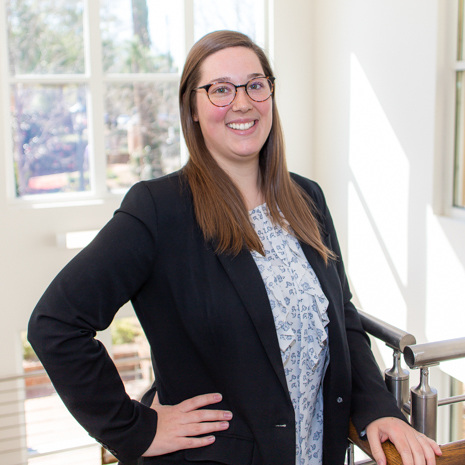 "I connected with some of the Habitat affiliates from Portland (Oregon) at the conference and shared my information. I would love a job combining community organization, policy, research and advocacy."