While Hollywood may be home to the critically-acclaimed movie "Green Book" this holiday season, the University of South Carolina Libraries is home to the book that started it all.

Victor H. Green, a postal worker from Harlem, began publishing the Green Book in 1936. It was a state-by-state guide to hotels, restaurants, nightclubs, gas stations and popular sights that welcomed African-American travelers and tourists in a time of racial segregation.

USC’s South Caroliniana Library holds a spring 1956 Green Book in its collections that researchers have been consulting both online and in person since its acquisition. The library has put together an exhibit, "Green Book: African-American Travel Experiences," due to the movie’s success.

In addition to the Green Book, the USC Libraries exhibit includes photographs, postcards, advertisements, letters and other items drawn from its vast Civil Rights and historical African American collections. It explores the businesses, social climate and the new era of tourism across the nation and state.

“But while people had the means, travel for African Americans wasn’t necessarily easy or safe. They faced the very real threat of hostility and physical harm on the road, so the Green Book was a critical guide for travelers at the time,” Duncan said.

Several items in the exhibit were selected from libraries’ collections including those of civil rights activists and leaders Modjeska Monteith Simkins, John Henry McCray and the Reverend Joseph A. De Laine.

Simkins, a leader of African-American public health, social and civil rights reform, and her husband Andrew, owned and operated Motel Simbeth in the 1950s and 60s, eight miles north of Columbia. In addition to providing lodging and relaxation, Motel Simbeth became a landmark for the civil rights movement. Ads for and images of the hotel are part of the exhibit. South Carolina Political Collections holds Simkins’ papers.

“There’s a letter from the Reverend Joseph A. De Laine to the Esso gas station headquarters, in which he describes in detail multiple threatening and violent encounters his family had at one of its South Carolina gas stations,” Duncan said.

“We’ve included Esso’s reply, on its corporate letterhead, that does nothing but distance itself from and deny responsibility for any part of the incidents.”

De Laine, whose papers are at South Caroliniana Library, worked with Simkins and the South Carolina NAACP on the Briggs v. Elliott case, one of five cases argued under Brown v. Board of Education, which declared segregated public schools unconstitutional.

John Henry McCray published the Lighthouse and Informer newspaper, and co-founded the first African-American Democratic Party in the South. Multiple business cards and postcards from his collection at South Caroliniana Library are included in the exhibit.

Victor Green published the Green Book for 30 years — through 1966.

"Green Book: African-American Travel Experiences" is on exhibit at USC’s Thomas Cooper Library through December 21, 2018, and will be included in a major exhibit, "Justice for All: South Carolina and the American Civil Rights Movement," taking place in 2019. 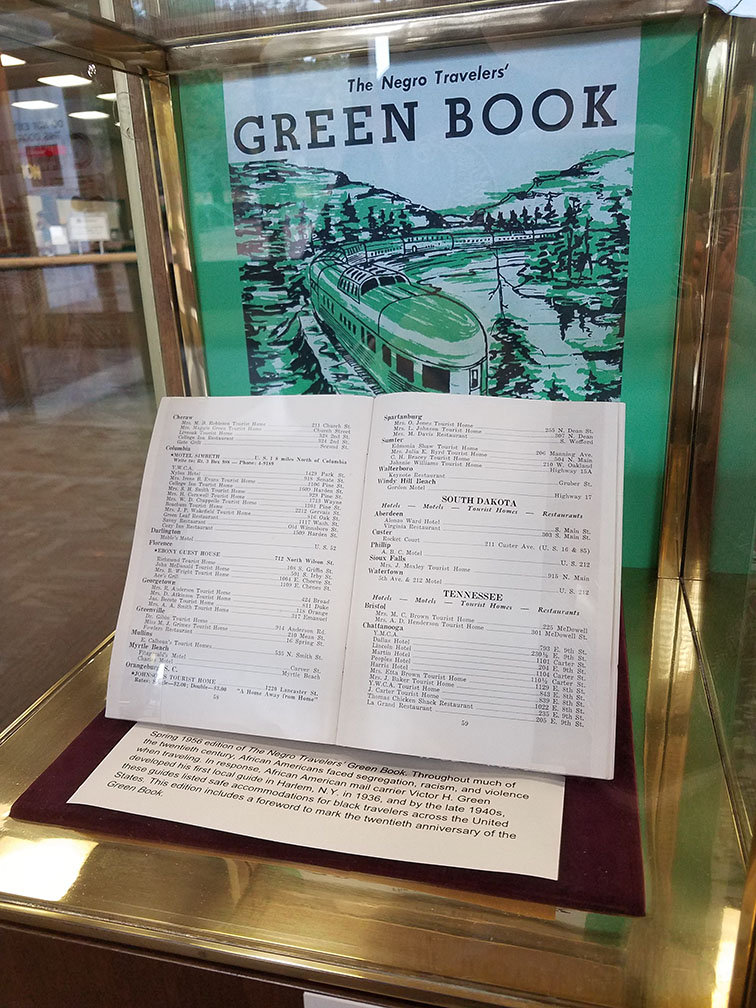