Chicago attorney, author, artist and collector Jeffery M. Leving recently gifted to the University of South Carolina Libraries an extraordinary item — a third edition, second state of Shakespeare’s plays, the rarest of the four folios published in the 17th century.

Leving’s third folio is now held by the Libraries Irvin Department of Rare Books and Special Collections. It joins a rare second and fourth folio, offering researchers and students of Shakespeare worldwide the opportunity work with three of the folios — an opportunity that wouldn’t be possible without the passion for collecting Leving explains below.

I developed an interest in collecting as a child when I was a little boy. I’d pick up seashells on the beach and collect them. I collected everything.

When I was in grammar school, I started reading everything I could read. I read all of Shakespeare's plays. I grew up in the South Side of Chicago, which has more challenges than the rest of Chicago. So, when I read Shakespeare, it put me in sort of a fantasy world that took me out of Chicago.

I became fascinated with Shakespeare and literature, and I became very interested in rare, scarce books that were almost unobtainable or unobtainable.

When did you start collecting, and what do you collect?

When I was very young. I don't know if I'd use the word collecting. Because I had no money to collect, but I would borrow items. My grandfather was a carpenter. Once he found a coin on a worksite that was minted immediately after the Revolutionary War and he gave it to me. I have a very unusual collecting appetite because there's nothing I don't collect.

For instance, I obtained the first Christian Bible ever published in Venice, published in 1475. When I had it restored, a book plate was found in it that belonged to a pope from the 1700s. I found that fascinating. Many years ago, I was also fortunate enough to find a Douay-Rheims Bible, which was the first Catholic Bible translated from Latin into English.

I would say the largest part of my collection is related to literature. While I have multiple Shakespeare folios, I only have one third folio, which is the rarest of them all. Very few exist. Most of them were destroyed in the Great Fire of London in 1666. I’ve wanted a third folio since I was in grammar school. They’re almost unobtainable.

But I also focus on Americana and the Civil War. I personally believe that I have one of the most important private collections of historical documents related to American history.

What is your most prized possession?

The Third Folio was my most prized possession. My second is a tie between two documents. One is signed by George Washington and the other is signed by Jefferson Davis.

My primary interest is literature. I've always been fascinated with Shakespeare — but also George Washington and Jefferson Davis. But I also have many documents signed by Robert E. Lee and Abraham Lincoln.

Then there’s Dr. King. Dr. Martin Luther King, Jr. had a personal assistant who kept diaries of everything he did, and in one of those diaries, Dr. King made notations himself. There are five of these unpublished diaries written during the height of the Civil Rights Movement that no one has seen, and I have them. I’ve written three books, and I want to write a book about the diaries called The Secret Diaries of Dr. King. I just have to find the time to do it.

Do you have any advice for new collectors?

You have to collect what you love. And you must study and really understand what you're collecting.

For example, I am always looking for unobtainable rare books and documents. A few years ago, an auction house had a very important document concerning Gideon Wells, the U.S. Secretary of the Navy during the Civil War. It contained his signature, but the auction house wasn’t sure if it was authentic. The item went up for auction, but no one bid on it because they thought it was a fake. So, I won it and the signature was authenticated. But because the auction house wasn’t sure, they didn’t even put the fact that there was a signature on the document in the listing description.

Also, I was at an auction house where they were auctioning off an unpublished manuscript that Alex Haley wrote about a bandit in the Middle East. No one looked at it closely. I bought it and examined it very carefully. On the reverse side, in Haley’s handwriting, was a partial manuscript for the book Roots. It was an early manuscript, so it showed how he was thinking and how he was putting the story together. Haley drew a line through the backside of each of those pages. Evidently, he didn’t want to use new paper for the bandit story.

Outside of collecting, what are your other interests?

I have thousands of items and I really need to start cataloging them. I do a lot of writing, I really would like to write another book, but I’ve written tons of articles for the Chicago Sun Times. But a true of hobby of mine is that I paint.

Why did you choose to give the University of South Carolina your third folio?

What are your dreams for the Third Folio at Carolina?

I'm hoping it will be studied, read and utilized by students and professors, because it is so incredible and so important. I just think it's a treasure for any student of Shakespeare. 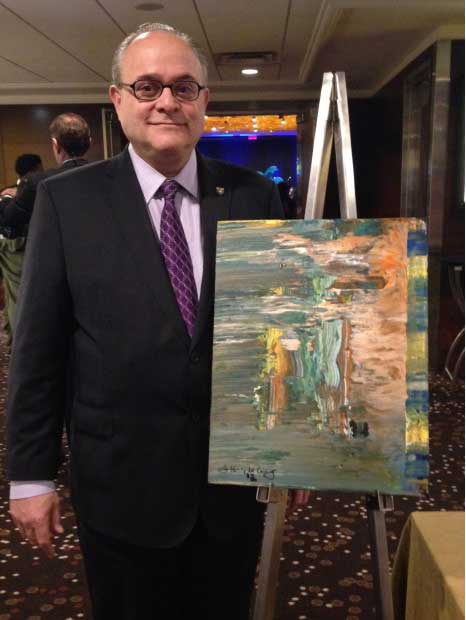