The Digital Age Comes to the Map Collection

The UofSC Libraries have impressive map collections, but perhaps the most impressive component of those collections is not a map or series of maps but photographs – aerial photographs, to be exact.

Compiled through gifts or donated out of necessity, the collection numbers over 130,000 images and covers the 1930s through the 1980s, when satellite images replaced fixed wing flights.

A UofSC Libraries project to scan and georectify these aerial photographs by county began in 2013. To date, more than 50,948 photos for 14 South Carolina counties have been digitized.

In July 2013, the Libraries were awarded a three-year grant of $166,000 from the Gaylord and Dorothy Donnelly Foundation to scan and geo-reference our collection of aerial photography for the Lowcountry of South Carolina. The project’s main goal is to enhance access for the general public through the Libraries’ digital collections, as well as online mapping services like Google Earth and ESRI. The project also preserves the tangible collection, as most of the use will be through the electronic resources. A third goal is to raise awareness of the resources available to students and researchers interested in the physical geography of South Carolina.

The Geography Department partnered with the Libraries to conduct initial training and set-up of the project. The department’s main role has been to help identify students to work on the project. Twenty-nine students have contributed to the project, and 23 of those were geography majors. The Campus GIS Coordinator Kevin Remington, Geography, has provided additional support during the whole life of the project.

With georeferencing, we can lay a picture of the past on top of a map of today.

The Libraries’ aerial photographs represent an unprecedented view of South Carolina as it transformed from a mostly rural state into a destination for tourism and manufacturing. The photos document changes to land from the damning of rivers, the construction of interstate highways, and the growth of suburbs and ex-burbs. They document the growth and change of urban areas like Charleston, Columbia, Greenville and Anderson, and resort towns like Hilton Head and Myrtle Beach.

The aerial photographs have largely been a hidden treasure frequented only by those in the know. Transportation historians and planners, environmental engineers, real estate lawyers, and the occasional biologist or geography student, have found the photographs to be invaluable.

The collection found a home at the University Libraries through the Geography Department and donations from county extension agents. Produced from flights funded by the Agricultural Research Service of the U.S. Department of Agriculture, the photos were designed for local or regional use. As new sets of photos arrived, the working agronomist or county agent needed a place to send their older collections. Over time the collection grew.

With multiple images, taken over time, we can document the changes caused by nature and man.

“Georeferencing” means to define a thing’s existence in physical space. That is, establishing its location in terms of map projections or coordinate systems. Examples would include establishing the correct position of an aerial photograph within a map or finding the geographical coordinates of a place. This procedure is thus imperative to data modeling in the field of geographic information systems (GIS) and other cartographic methods. When data from different sources need to be combined and then used in a GIS application, it becomes essential to have a common referencing system. This is brought about by using various georeferencing techniques. Most georeferencing tasks are undertaken either because the user wants to produce a new map or link two or more different datasets together.

A simple explanation comes by describing the power of georeferencing. For example, what is the history of a piece of land, an intersection, a point on a river, or an island on the coast over a period of 50 years, and how does it related to what we know exists today?

With georeferencing, we can lay a picture of the past on top of a map of today. With multiple images, taken over time, we can document the changes caused by nature and man. Onto this we can layer additional information like storm surge mapping from Hurricane Hugo, or the before and after effects of Hurricane Hazel, or see where new development has affected streams, rivers and bays. This can be used for making decisions about planning for growth that has as little impact on the environment as possible. Looking at these maps from the past is informing our planning for the future. 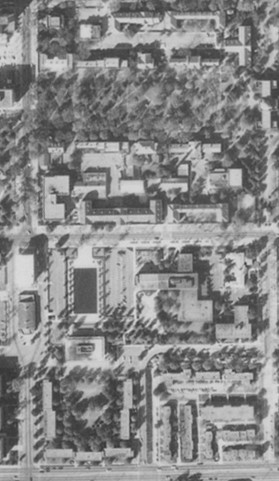