The Papers of William Short 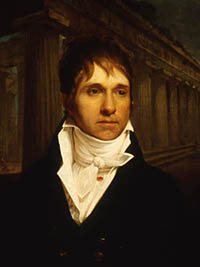 The Papers of William Short is a born-digital documentary edition focusing on Virginian William Short (1759-1849), Thomas Jefferson’s “adoptive son,” who was a diplomat and fiscal agent in Europe, a successful businessman and philanthropist in the United States, and an early advocate of the emancipation of enslaved people in his home state. This selective edition of Short’s papers will comprise the transcriptions of the incoming and outgoing correspondence and has collected a major part of Short’s papers and correspondence. The Université Paris Est-Créteil (UPEC) financed the purchase of the complete microfilmed collection of the Short Papers held in the Manuscript Division of the Library of Congress (LOC). The Association française d’études américaines funded a two-month research grant at the LOC to collect Short correspondence in other collections. Thanks to a fellowship from the International Center for Jefferson Studies (ICJS), the project has collected items there and included its president on our advisory board. In addition, the project has obtained all the Short correspondence held in the Archivo histórico nacional (Madrid) and the Archivo de Indias (Sevilla) as well as most of the correspondence from the Archives diplomatiques and Archives nationales (Paris).

Now, with the support of the National Historical Publications and Records Commission (NHPRC), as well as our partners at the University of South Carolina, the Institute for Southern Studies (ISS), we will collect material at the Nationaal Archief (The Hague), the Historical Society of Pennsylvania and the American Philosophical Society, and at the William & Mary University Libraries. The research trip to The Hague will be financed by the UPEC and the ones to Philadelphia and Williamsburg by the NHPRC grant. In sum, by the starting date of the project on 1 October 2022, the bulk of the William Short papers, approximatively 22,000 items, spanning the years 1778 to 1853, will be in possession of the project. We estimate that it will require ten years to complete the full editorial treatment and publication of approximately 20 percent of the 22, 000 documents.

The project aims to bring to light an enterprising and knowledgeable yet forgotten diplomat, businessman, and philanthropist, who navigated confidently and with vision the choppy waters of a Euro-American world in full convulsion, reconfiguration, and construction. By making Short’s papers available to scholars and the general public, this digital publication will contribute to re-evaluating key topics in the history of international relations, diplomacy, economy, politics, and finances of the late 18th century United States and Europe, notably France. Likewise of enormous interest is Short’s correspondence about slavery, colonization, and a proposed Black tenancy project, which was instrumental in his plans for emancipation.  Finally, Short’s correspondence with his business partners, in particular with his nephew John Cleves Short, and business papers are untapped resources for early 19th century U.S. history of business, communications, finances, and entrepreneurship.