A symposium series on law and morality.

About the Barnes Symposium 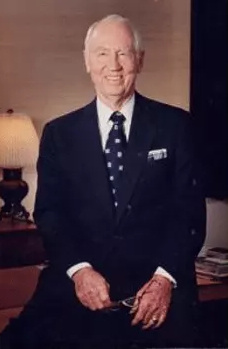 Rudolph C. Barnes Sr. (1917-1995) studied at the University of South Carolina, served in the U.S. Navy during World War II, then returned home to become a prominent member of the South Carolina bar. For over 40 years, he remained active in charitable and religious organizations.

The Rudolph C. Barnes Sr. Symposium honors his interests and engagement through an annual program examining problems of law and morality understood in the broadest sense. The Barnes family has made the event possible through a generous endowment in his memory.

Ross Douthat joined The New York Times as an Op-Ed columnist in April 2009. Previously, he was a senior editor at The Atlantic and a blogger for The Atlantic.

He is the author of "The Deep Places: A Memoir of Illness and Discovery" (2021), "The Decadent Society (2020),  "To Change the Church: Pope Francis and the Future of Catholicism" (2018), "Bad Religion: How We Became a Nation of Heretics" (2012), "Privilege: Harvard and the Education of the Ruling Class" (2005), and a co-author, with Reihan Salam, of "Grand New Party: How Republicans Can Win the Working Class and Save the American Dream" (2008). He lives with his wife and three children in New Haven.

Douthat will discuss the resilience of religious ideas as a grounding for political legitimacy, as well as the extent to which even secular authorities rely upon metaphysics rather than pure neutrality to ground their authority in the liberal order.

Mustafa Akyol is a senior fellow at the Cato Institute, where he focuses on the intersection of public policy, Islam, and modernity. He was a longtime contributing opinion writer for the New York Times, covering politics and religion in the Muslim world, and has published widely in many other prominent media outlets.

He is the author several books, including: "Reopening Muslim Minds: A Return to Reason, Freedom, and Tolerance" (2021), “Why, As a Muslim, I Defend Liberty” (2021), “The Islamic Jesus: How the King of the Jews Became a Prophet of the Muslims” (2017), and “Islam without Extremes: A Muslim Case for Liberty” (2011). His books have been translated into many languages, and praised in the New York Times, Wall Street Journal, the Chicago Tribune, Los Angeles Times, The Economist, Financial Times, and many publications across the Muslim world. Meanwhile, Islam without Extremes was banned in Malaysia, for challenging the authority of the “religion police.”

“The Thinking Muslim,” a popular podcast, recently defined Akyol as “probably the most notable Muslim modernist and reformer.” And in July 2021, the Prospect Magazine of the UK listed him among “The world’s top 50 thinkers.”

Akyol will speak broadly on the state of Islam in the modern world today, focusing on issues of religious freedom and democracy.

Mustafa Akyol, "Islam and Freedom of Expression".  There was also a discussion panel with:

Africa presents both an upside and a downside. Following Asia’s remarkable economic success, many regard Africa as the last great development challenge. Now successful Asian countries like South Korea and Singapore were impoverished as recently as the 1960s. Meanwhile, Africa is arguably in an economic and social position comparable to 1960s–1970s Asia. If economic development goes well, perhaps in fifty years Africa will look like the current Asia incorporating a new set of international players. On the other hand, there are obvious issues that might interfere with successful African development. The 2014 Barnes Symposium examines issues associated with South-South economic cooperation, Boko Haram and the ebola pandemic as competing sides of the coin under current conditions.

Asia is considered the great development success story, while Africa and to a lesser extent South America have lagged since the 1970s. Asian countries are now increasingly engaged in outward economic activity also into Africa and South America, challenging established patterns, and there is an on-going discussion of South-South economic cooperation as alternative development path. The 2012 Barnes Symposium examines issues associated with mostly emerging Asian multinational enterprises, private and quasi-private sector driven development, business and human rights in Africa. In the Subsaharan African context, among African countries policy currently focuses on issues whether economic development is better served by seeking more international trade and investment versus a focus on African trading blocks in regional terms.

A Common Word Between Us and You is an interfaith dialogue initiative commenced in 2007 by scholars, clerics and intellectuals from across the Islamic world in a spirit of intellectual interchange with their Christian counterparts. It brings to the fore, in the interest of developing a meaningful peace, how the Islamic and Christian communities representing well over half of the world’s population might agree on love of God and love of neighbor as common beliefs. We expand the inquiry addressing religious commonalities (love of God), but also governance and legal development (love of neighbor) in the practical context of international challenges such as development, the environment and human rights.

Asia is considered the great development success story, while Africa and to a lesser extent South America have lagged since the 1970s. Beyond the traditional rhetoric of South-South cooperation, various Asian countries are now increasingly engaged in outward economic activity also into Africa and South America, challenging established patterns. The 2008 Barnes Symposium addresses issues associated with emerging (Asian) multinational enterprises, private and quasi-private sector driven development, business and human rights, and, on the religion side, the extent to which behavior and law is actually influenced by religious doctrine as opposed to social custom as part of the non-Western environment (tribalism problems, including but also beyond Islam).

Legal change is embedded in modernization, but presents an underlying chicken and egg problem. Can law be employed to shape behavior as a form of social engineering, or must social behavior change first, and legal change can only follow as form of ratification or reinforcement of changed behavior? Is the natural counterweight to the modernization concept’s implicit assumption of secular, national law as part of economic and social development a growing emphasis on non-Western alternatives, such as incorporation of sharia law into national legal systems in Islamic countries, or other alternatives elsewhere? But, paralleling issues in the West, is the claimed religious basis for law a dispute over social standards rather than about doctrine? What is legal development’s source of legitimacy, if not modernization? And how can military lawyers and civil affairs practitioners apply this knowledge to current challenges?

How real is our consensus about human rights beyond the traditional human rights community? And are claims of legitimacy easily accepted in conjunction with military operations thought to be in support of human rights, as has been claimed in Iraq and Afghanistan? The US favors civil and political rights on an individual basis, while largely rejecting economic and social rights as well as so-called third generation or group rights. Meanwhile, much of the rest of the world recognizes economic and social rights, and the developing world arguably gives them priority along with group rights. How to make sense of these differences outside the customary framework viewing human rights through the lens of universalist claims versus cultural relativism?

Where to strike the balance in opposing national security to individual liberties and the rule of law, both internationally and domestically? The 2005 Barnes Symposium addressed the overlap between religion, ethics, armed conflict and law in the context of on-going events in Afghanistan, Iraq and the war on terror. Broader issues are visible under domestic and international law in areas like intelligence, reconciliation of civil liberties, dealing with non-state actor threats, and permissible bounds of interrogation, treatment of prisoners and armed conflict law developments generally.

Rudolph Barnes Jr., an attorney, United Methodist minister, and retired U.S. Army colonel, made the event possible through a generous endowment in memory of his father, Rudolph Barnes. He also moderated the program along with School of Law professor Richard Seamon.