Elizabeth Wentworth Dodge was born August 10, 1884, to Cleveland H. and Grace Parish Dodge, at Greyston, the Dodge family summer home in Riverdale, New York. The wealthy Dodge family had a strong tradition of philanthropic and evangelical activity and her aunt, the philanthropist Grace Hoadley Dodge, became the first president of the YWCA of the U.S.A. when that organization formed in 1906.

With encouragement from her aunt Grace, Elizabeth also became involved with the YWCA. Pursuing her own interests as an avid painter, she helped organize a Studio Club for art, dance, and music students with the YWCA in New York City. Her father’s work with Robert College in Constantinople, Turkey, led Elizabeth to meet her first husband, George H. Huntington, who was on the faculty of the College's preparatory Academy. Elizabeth became involved in Robert College, American College for Girls, the YWCA, and its Istanbul Service Center for young women.

Elizabeth served on many YWCA committees through the 1940s and 1950s. After George's death in 1953, she married her long-time friend, Dumont Clarke, in 1955. In the 1950s and 1960s, Elizabeth served on the Board of Robert College and the American Hospital in Istanbul and continued her involvement with the YWCA. She received an honorary degree from Western College for Women in 1963. 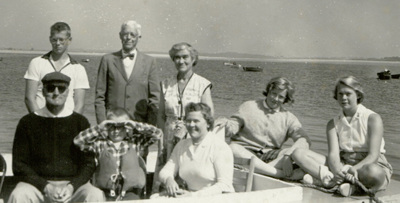 Dumont and Elizabeth Clarke on vacation in 1958 with the Lewis family. Kevin Lewis is standing in the back next to his grandfather.