When Discover UofSC 2019 keynote speaker Dr. Kenneth Ramos was 15 years old, he entered the University of Puerto Rico as a freshman. By 20 years old, he was a practicing clinical pharmacist and clinical instructor percolating ideas for his next career move. That move turned out to be a Ph.D. program at the University of Texas at Austin where Dr. Ramos pursued combined studies in biochemistry and pharmacology with a focus on cellular signaling and myocardial pathology. From there, he trained as a postdoctoral scholar in the biology of smooth muscle denervation and embarked on a successful academic career, earning the title of full professor at only 35 years of age.

But again, Dr. Ramos felt the pull of a new challenge. This time, he answered it by enrolling in medical school, aiming to advance the then emerging field of genomic medicine. Dr. Ramos then began a new career as a doctor practicing precision pulmonary medicine. Later, he would re-enter academic service as a physician-scientist. And, just this year, after serving in various executive positions at the University of Arizona Cancer Center, Dr. Ramos has again taken on a fresh new career challenge, making a move to Texas A&M University where he was named Executive Director of the Institute of Biosciences and Technology and Assistant Vice Chancellor for Health Services.

Oftentimes, especially in today’s era of individualization at every level of decision-making, we tend to lose sight of the responsibility that every one of us shares to contribute to the betterment of society.

Impressive as this career arc is—and it is very impressive—it doesn’t tell the whole story of Dr. Kenneth Ramos’ serious pursuit of educational achievement and scientific discovery as a driving force in his life. A focused and thoughtful student, young Ken found school to be “a nurturing and stable environment for me. So, the greatest peace of mind and greatest joy I always found while studying, and while in school. I’ve always been sort of a curious individual. I was one of these kids that was always a ‘Why?’ kind of kid. And studying was a way to get answers.”

He began to channel that curiosity into science intensively as a middle schooler when he was bitten by the science fair bug. He entered science fairs throughout middle and high school, and made it to nationals once, with a project investigating the efficacy of various natural compounds from plant extracts in treating warts. “In those days of course, there was no HIPAA, no human research guidelines, so I actually completed a clinical trial…. You can imagine, that sparked my interest in chemistry, interest in drug development, interest in medicine, which is what I ended up doing throughout my career.”

As a scientist and physician, Dr. Ramos has made decades of valuable contributions to human health, both in clinical and research settings. But his path to career achievement wasn’t always so clear. That’s why Discover UofSC 2019 keynote speaker Dr. Kenneth Ramos has a bit of advice for UofSC students, based on a mistake he made himself early on. “Something that I did not do, ever, as a young man, which was a huge mistake for me, is that I always fought my struggles on my own. I was introspective. I was cautious. But I never sought enough mentorship. During those years, I never had enough mentors. Of course, I did have some, and they were wonderful. But I never sought to ask somebody who had been there before, who had gone through what I was going through, for advice. I somehow felt that I was supposed to figure this out on my own, and that’s a huge mistake.”

He also has a few words of guidance for how students should approach planning for the future. “Oftentimes, especially in today’s era of individualization at every level of decision-making, we tend to lose sight of the responsibility that every one of us shares to contribute to the betterment of society. For people who go to college, and for people who aspire to make themselves better, education opens your horizons, which in turn opens a world of possibilities. So, in that realm, it’s critical that we never lose sight of the responsibility we all share, and that is the need to contribute. I hope I can inspire others to continue to do just that, to make a positive difference in the lives of others.” 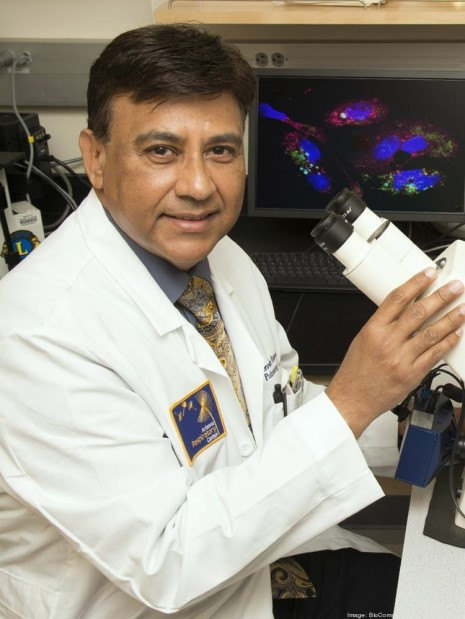 Dr. Kenneth Ramos will deliver the Discover UofSC 2019 keynote address, "A Journey of Discovery and Realization Navigated Through the Lens of Science," on Friday, April 26, 2019, at 11:30 a.m., in the Columbia Metropolitan Convention Center, Richland Meeting Room.