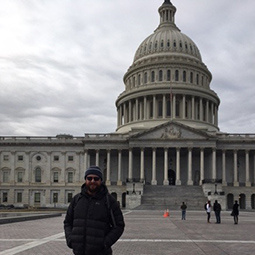 I was active duty Air Force from 1998-2007 and in that time I traveled extensively and lived in some very unique locations such as Turkey and the island of Guam.  After I left the Air Force I began teaching and developing online courses for several colleges. I have presented at three conferences, North Carolina Association of Historians, Fayetteville NC, February 2015, Cappadocia: The Land of God and Paint, Florida Conference of Historians, St. Augustine, FL, February 2014, The Thirsty Monk and the Medieval Art of Monastic Beer Brewing, and World History Association, Minneapolis, MN, June 2013, The Armenian Kingdom of Cilicia: A Crusading Cross-Cultural Exchange.

I recently lived in Asheville, NC and moved to Charleston three years ago for my current job working as an Air Force Historian for the 628th Air Base Wing.  I document the annual history of the wing and occasionally deploy to not so nice locations.  Last year, I spent four months in Kabul, Afghanistan writing the history of the Air Force wing located there.  It was quite the experience to say the least.