A world-wide problem led to a unique real-world experience for Carmen Jackson:  The third-year student at the University of South Carolina School of Law discovered her passion this summer on the other side of the globe, helping refugees who had fled to Australia.

Refugees can be found in almost every country on Earth, according to statistics from the Asylum Seekers Resource Center, an Australian-based human rights organization. Those figures include more than 200,000 in the United States and more than 30,000 in Australia.

Jackson says she recognized that there was a growing need for lawyers and volunteers in this field, and she knew that her education at South Carolina Law would provide the greatest way for her to make a difference.

As a part of a 10-week course, she spent three weeks studying at an Australian university where she learned Australian law, the intricacies of their courts, and how to relate it all back to the refugee crisis. After that, she spent her remaining time working with the ASRC.

“The legal center that we worked with tried to give us experience in every part of their legal team -- with the paralegals, with the solicitors, and with the caseworkers,” Jackson says. “By the end of the week, we got our own clients.”

With genuine warmth in her voice and a smile that could put almost anyone at ease, she helped take statements from the refugees and process their cases. Even so, the stories sometimes still brought her to tears.

“It was really difficult at first.  Because the department is so hard on their claims, it wasn’t realistic that everybody was going to be able to get help from us. There were times when I had to go into an office and tell someone that we could help them draft a letter, but that we couldn’t take on their case or provide them with full assistance,” Jackson said. “I would ask the barristers if it ever got any easier, but they said that you just got used to it.”

Despite the difficulties, Jackson says the life-changing experience helped her realize her future--and how she will be able to use her South Carolina Law degree to aid refugees here in the United States.

“Refugees are all around us in America; they are not a far-removed concept. No matter your political beliefs about refugee laws and policies, remaining informed is critical to dialogue that brings about change,” says Jackson. “I think that going abroad helped me to see that the decision to enter the legal profession is one that has the potential to afford endless opportunities both domestically and abroad. The skills we develop as lawyers can help those in our city, state, country and across the world.

“The fact that I was able to sit across the table from people who had come from such persecution and yet still had a smile of gratitude beaming across their face was humbling in the truest sense of the word. I will remember their faces and their gratefulness forever.” 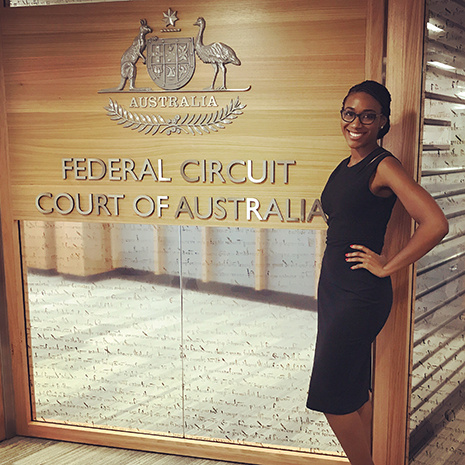 Carmen Jackson spent her first three weeks in Australia studying Australian law at a local university, before she began her work with refugees.