Demetrius Pyburn added a J.D. to the end of his name this past May, but it was another title he earned while in law school that he says matters much more: Dad.

Pyburn and his wife, Shana, welcomed a baby boy at the beginning of his third-year at the University of South Carolina School of Law. Demetrius Jr. (DJ) arrived two months early during Dad’s externship with Haynsworth Sinkler Boyd PA in Greenville. While juggling the demands of a rising-3L summer externship, and now a newborn, Pyburn also continued his service in the U.S. Army Reserves. It’s an impressive feat the family says wouldn’t have been possible without the help of South Carolina Law.

“The law school was very supportive when it came to child care issues. The professors were very accommodating, even allowing DJ to come to class. My classmates enjoyed seeing him around school and it felt like a large family atmosphere,” says Pyburn. “By the end of the school year, there were classmates asking me to bring my baby to class, so that felt great.”

Shana called the School of Law’s support a blessing, knowing that she would never be able to continue her own education without the help.

“Kids aren’t allowed on my campus at all, so it was a major relief we were able to work with USC Law. Even during finals time, if Demetrius had an exam during the time another classmate didn’t, they offered to babysit in the lobby for us. The administrative staff also watched him if we needed. It was just such an overabundance of love for my husband and son. It’s something I’ll never forget,” says Shana.

While time and sleep were often limited, Pyburn didn’t let that keep him from engaging in organizations on-campus. He was a member of the Black Law Student Association, Black Graduate Student Association, Service Members and Veterans in Law, and ABA TIPS Aviation and Space Law. His hard work paid off, and after taking the bar in July, Pyburn will go to work full time for Haynsworth Sinkler Boyd PA.

He says law school helped him grow as a student, person and father, giving him a support system to fall back on when late night baby feedings and all-night study sessions controlled his life. Without the flexibility and support of the law school, he says he may not have graduated on time. Beyond the class accommodations, Pyburn says his professors took an interest in teaching him about more than just the law.

“Many faculty members at USC Law have families, so it also helped to be able to ask questions as a first-time dad on how to do various things for DJ.”

After an active duty career in the Army, the California native decided to move to South Carolina for law school, when he was impressed by how personable the school and admissions team were. His first impression of the school was dead on, he says, proving to be even more true when baby DJ arrived on the scene. Now that he’s graduated and the family of three prepares to move to Greenville, Pyburn says their fondest memories of Columbia will be the times that brought them together and the faculty, staff, and classmates who helped them along the way.

“Many people describe law school as being hard, but it’s that support systems that helps put things into perspective when you’re stressed. Sometimes you just need someone to remind you to take care of yourself.” 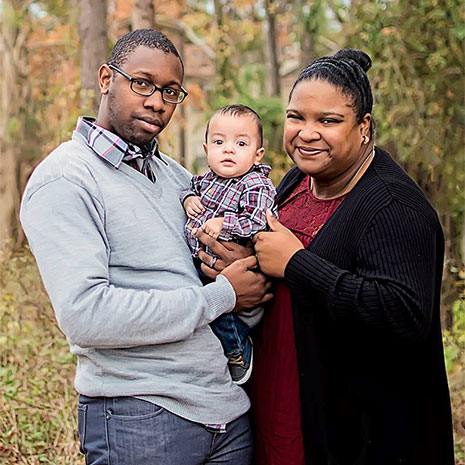 Demetrius Pyburn with his wife Shana and baby DJ.