Throughout the 187,500 square feet of the new home of the University of South Carolina School of Law, there are brand-new classrooms, state-of-the-art technology, and grand architecture. But as the school forges the next phase of legal education and celebrates its 150th anniversary, it looks to its roots for grounding.

One piece of history that links the past and the present is the bench in the Judge Karen J. Williams Courtroom. While its design is seamless with the rest of the room, and its use proper, it has a story all its own that dates back to the 1870s. After the Civil War ended, South Carolina had a new state constitution and a new high court. The legislature commissioned a bench for South Carolina’s first Supreme Court, and that bench was in use for almost a century until, in 1971, the court moved into its own building. The bench was left behind and moved into the basement of the South Carolina State House, where it was all but forgotten, gathering dust and providing shelter for creatures from time to time.

Then, in 1992, when the State House underwent major renovations, it was rediscovered. It was offered to the School of Law just as talks of a new building were beginning. The law school took the bench in hopes of one day having a suitable place for this piece of history. Professor W. Lewis Burke and Pam Robinson, director of the Pro Bono Program, were instrumental in helping the bench find a new home at the law school.

“We were kind of shocked and confused why it was in the basement of the State House. But we said, ‘Oh, we have to save that,’” says Robinson.

For the next 25 years the bench sat in the lobby of the School of Law’s old building on Main Street. There, it was used as a study desk, a bake sale table, and even a food and drink station during special events, among other things.

“The lobby wasn’t exactly the most noble place for [the bench]. But it kept it and preserved it until we were ready to use it,” says Rob Wilcox, dean of the law school.

On certain occasions, such as when the U.S. Court of Appeals for the Fourth Circuit held hearings at the School of Law, it was moved into the auditorium.

“It wasn’t exactly portable,” says Robinson. “And every time we moved it, I sort of winced because it wasn’t good for it and I thought if I was that old I wouldn’t want to be moved and taken apart.”

Today, the bench finally sits in its permanent place in a room befitting its stature.  It was an accomplishment Burke and Robinson say they are proud of. The 300-seat courtroom is one of the crown jewels of the new building and was built as a working courtroom, and will play host to actual jury trials and appellate hearings, as well as mock trial and moot court competitions, symposia, and other special events.

“I hope students will learn the history of the bench and know that we value our books and benches, as well as our laws,” says Burke.

It’s the history and heft of the bench that Robinson says grounds the law school’s new home on Senate Street.  “While all of the shiny and new details of the building will help us better educate law students, it’s the historic pieces that will remind the students why the law is so important.”

“It’s fabulous to see that a piece of pine furniture that’s been around for roughly 150 years can have such an important role in a school that will be here for the next 150 years,” says Dean Wilcox. 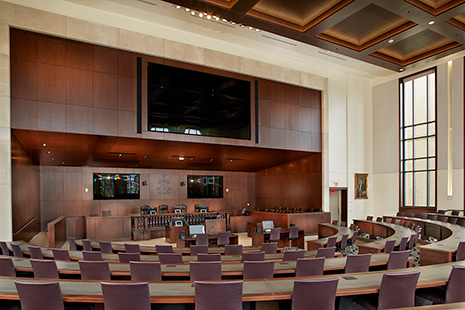 A piece of history

“While all of the shiny and new details of the building will help us better educate law students, it’s the historic pieces that will remind the students why the law is so important," says Pam Robinson.