For 2017 law graduate Whitney Kamerzel, the school’s global reach is the reason she chose to attend the School of Law in the first place. The Florida Keys native knew she wanted to practice law in the South, but also wanted to be a part of an international legal practice.

“USC Law was able to give me that early. We have professors who have worked for organizations like the United Nations and the World Bank and who have important connections all over the world. I knew the international law program would prepare me for a successful career.”

Kamerzel started early, connecting with professors like Aparna Polavarapu, who teaches Comparative Law, Rule of Law, Transnational Law, and International Human Rights Law, as well as Joel Samuels, a professor and director of the University’s Rule of Law Collaborative (ROLC). She secured a position as a research assistant, and spent her first summer and second year researching human rights issues in Uganda. In her third year, she became an important member of ROLC.

“I continued taking classes that expanded my interests in international law. During my 3L year, ROLC hired me to help them train U.S. government officials on rule of law promotion in developing countries.”

When it came time to graduate, Kamerzel accepted a position as a business litigation associate at Womble Bond Dickinson LLP in Charlotte, North Carolina. But she says it was the advice of a trusted teacher that opened her mind to an additional opportunity.

“My mentor, Prof. Samuels, pointed out to me that my first activity after law school should be to work pro bono. I realized he was right. In terms of practicing international law and giving back to the community, I wanted an experience that would set the stage for my career in the future.”

Through ROLC, Kamerzel was able to get connected with attorneys in Cambodia who were looking to fill a professional volunteer position for a human rights nongovernmental organization that specializes in indigenous and rights. After taking the bar exam, she was placed in Phnom Penh for two months, before beginning her work in North Carolina.

“Our job was to work with the local communities to find resolutions for human rights abuses that were caused by foreign businesses. A large part of my job was to brainstorm alternative methods of corporate compliance since most international schemes are voluntary.”

It was the perfect opportunity to bridge the gap between the work law school had prepared her for and the precipice of her professional legal career.

“I definitely couldn’t have done it without the help of my law school professors and the Rule of Law Collaborative. And my work in Cambodia had a creative element that constantly challenged my brain. Since the ball never stopped rolling, it was a smooth transition to practicing law in the U.S.” 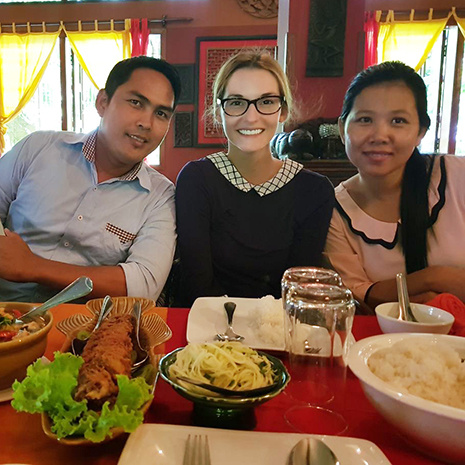 “My mentor, Prof. Samuels, pointed out to me that my first activity after law school should be to work pro bono. I realized he was right."