Class of 2018 celebrates commencement on the Horseshoe

On Friday, May 11, commencement exercises were held for the School of Law’s Class of 2018 on the University of South Carolina’s historic Horseshoe.

On a picture-perfect morning under the shade of decades-old trees, the 182 members of the class culminated their time as students by receiving one final lesson from distinguished speakers including Robert M. Wilcox ‘81, dean of the law school; Harris Pastides, university president; and this year’s commencement speaker, the Honorable Donald W. Beatty ‘79, chief justice of the South Carolina Supreme Court.

Adaptation was the theme of the morning, as each speaker reflected on the possibilities that lie ahead—and the importance of being open to receive them.

“Throughout your career, you will experience change at an increasingly rapid pace. And with change will come opportunity. You have proven as a class that you are ready, not simply to adjust with change as it comes, but to recognize opportunity and to be a part of the catalyst that initiates improvement,” said Wilcox.

“In life, it is always remarkable to me what you can do with your talents. I set out as a health scientist and epidemiologist and became a college president,” said Pastides.  “So, my advice to you is to stay engaged, get involved, and remain flexible. And always serve others as the core of your commitment.”

Justice Beatty echoed Pastides during his address, revealing that while he knew he wanted to be a lawyer from a young age, for much of his career he never thought about being a judge.

“But life happens,” he said.

One of the key ingredients to success, he continued, was to have a vision of what you want to accomplish in the future, but also be willing to pivot when opportunity presents itself.

It was those opportunities, along with a few other essential components—among them building and protecting a good reputation, appreciating the small accomplishments as much as the large, the importance of work-life balance, and recognizing how much you can always learn from others—that have shaped his almost 40-year career.

“Mine has been an improbable journey.  What began as a vision of a little boy to be a lawyer has taken me to the pinnacle of our profession,” said Justice Beatty.  “Each of you will have your own unique journey, whether practicing law or working in the corporate world or some other endeavor.  Wherever you choose to begin, know that your career will not be what you initially envisioned. As in my case, it might end up even better.” 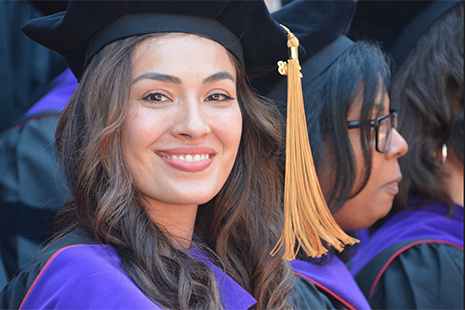 Watch our video from the May 11, 2018 Commencement Exercises on the historic Horseshoe.