Hazel A. Bridges always wanted to be like her grandmother, someone she considered a true public servant. Bridges says it was bittersweet to learn that she was selected to be a 2018 Dwight D. Eisenhower Graduate Fellow the same week as her grandmother’s death. Now, she says, she plans to use the opportunity to carry on her grandmother's legacy.

The Dwight D. Eisenhower Graduate Fellowship is awarded based on merit, and applications are evaluated by the Eisenhower National Selection Panel. The panel is composed of prominent national transportation professionals from academia and private and public sectors, who review, rate and rank each applicant. Bridges' experience as a dual-degree student, seeking both a juris doctor and a master’s degree in public administration, placed her among the top tier of applicants. While her qualifications are impressive, it’s her passion and drive that stands out most.

“I have always been interested in economic and community development," Bridges says. "Transportation, mobility, and infrastructure are crucial to any state’s economic vitality.”

Part of the application process required Bridges to propose a research topic and plan, to be completed during her tenure as a fellow. The plan she submitted stems from a policy paper she worked on during her summer 2017 clerkship at the Federal Highway Administration Office of Chief Counsel.

“My research will review transportation systems and public-private partnerships to recommend efficient collaborations for state systems,” Bridges says. “I hope my findings can provide insight as the General Assembly considers the 2018 South Carolina Multi-Modal Plan.”

The Bennettsville, South Carolina, native says the most exciting part of her fellowship has been attending the Transportation Research Board’s 97th Annual Meeting, which was held in January in Washington, D.C., and featured topics such as policy, administration, research, government regulation, industry innovations and academic developments.

Her fellowship drew attention from legislators back home in South Carolina. On Feb. 8, Bridges was surprised by an invitation to the house floor at the South Carolina House of Representatives, where she was recognized by motion by Rep. Merita A. Allison, chairwoman of the House Education and Public Works Committee, and commended for receiving the Dwight D. Eisenhower Graduate Transportation Fellowship.

It was an honor reminiscent of one her grandmother received years ago: the North Carolina Order of the Long Leaf Pine, one of the state’s most prestigious civic awards. It’s a memory and model Bridges plans to carry with her.

“This fellowship has ignited even more my enthusiasm to continue my grandmother's legacy by remaining engaged, going beyond the call of duty and using my abilities to better my community,” Bridges says. 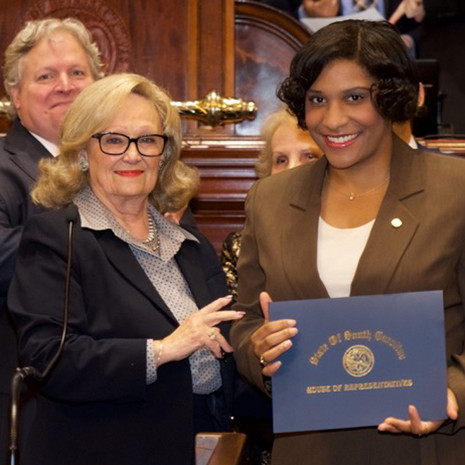 Honored by SC House of Representatives

The motion was written by the Chairwoman of Education, Rita Allison (left) and was signed by the Speaker of the House, Jay Lucas as well as the Clerk of the House, Charles F. Reid.