The University of South Carolina School of Law’s Mock Trial team entered the 2017-2018 season as one of the top trial advocacy teams in the nation.  In fact, in October 2017, Fordham University School of Law’s Trial Competition Performance Rankings listed the “Mock Cocks” as tied for 13th, while the Winter 2018 issue of preLaw magazine listed the team as one of the best in the country for the second year in a row, giving it a B+ rating.

As the competition season wrapped-up in March 2018, the team proved that these accolades are well-deserved.  The team participated in contests all over the southeast, but four competitions stand out as particularly exemplary.

The team kicked off the season on their home turf as the University of South Carolina School of Law hosted the Palmetto State Classic in October 2017.  Competing against 10 teams from across the United States, the team posted a strong showing, with Chelsea Lucas ’18 and Sierra Carini ‘18 advancing to the finals in this national competition. David Thompson ’19 was named an "Outstanding Advocate" for the competition.

In November 2017, the team participated in the William W. Daniel National Invitational Mock Trial Competition, known as one of the toughest contests of the fall season.  The team of Will Neinast ‘19, Creasie Parrott ‘18, Megan Rudd ’19, and Kyle Watson ’19 swept the preliminary rounds 3-0 and did not lose a ballot, earning the number one seed in the round.  The team ultimately made it to the semi-final round, but more importantly, all four members were unanimously named the “Most Professional Team” by the attorneys who judged all of the rounds.

In February 2018, the team returned to the regional round of the Texas Young Lawyers Association National Trial Competition, and again stood out from the competition as the only school to have two students (Parrott and Rudd) receive “Outstanding Advocate” awards.  Rudd and Neinast also advanced to the semi-finals as the number two overall seed out of 26 teams.

In March 2018, the team traveled to the South Texas Mock Trial Challenge in Houston, Texas, and placed as a National Octofinalist out of a field of 40 schools. Additionally, David Thompson ’19, took home his second “Outstanding Advocate Award” of the season (in only two competitions).

“These students put in 30-40 hours of work each week leading up to these competitions, and the results speak for themselves,” said Brett Bayne, coach of the South Carolina Law Mock Trial Team.  “I couldn’t be prouder of our team, and I’m already looking forward to see where they will take us next season.” 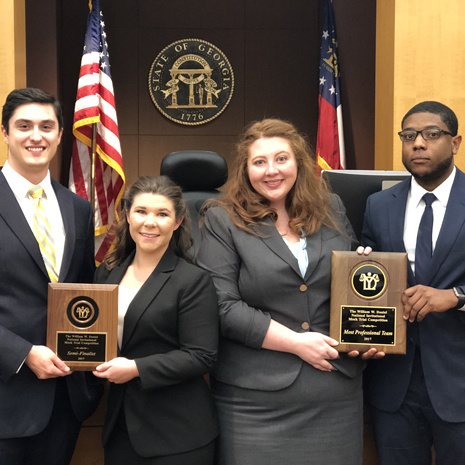