Two South Carolina Law mock trial teams made it to the semifinal round of the 2018 Palmetto State Classic Competition on October 19-21.  The teams were ranked first and second overall after three preliminary rounds, and also received other team and individual honors.

Additionally, Gasser and Tiara Pitts received two of only five awards given for Outstanding Advocate.

“I am always amazed at the hard work our students put in and it shows in the results they obtain in competition. We are especially proud anytime judges and attorneys recognize the our students for professionalism in how they handle themselves in a courtroom,” said Mock Trial head coach Brett Bayne.

The competition is hosted by Mock Trial Bar at South Carolina Law. It is judged by dozens of alumni and local attorneys. This year, the final round was presided over by The Honorable Justice George C. James of the South Carolina Supreme Court. 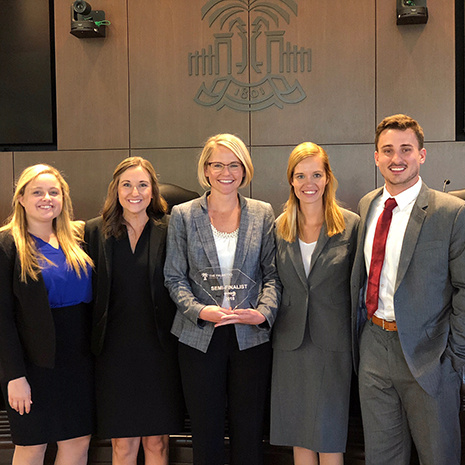