In 1968, I.S. Leevy Johnson became the first African-American graduate since Reconstruction to complete all three years of law school at the University of South Carolina. Fifty years later, Chelsea Evans graduated after serving as the first African-American editor-in-chief of the South Carolina Law Review. The two trailblazers recently sat down for a conversation about race and racism, the transcendence of success, and former Dean Robert Figg's reaction to Johnson's LSAT score.

Evans: Mr. Johnson, what made you want to go to law school and why did you choose to come to this law school?

Johnson: I did not have any intentions of attending law school. My ambition in high school was to be a mortician. I did attend mortuary science school at the University of Minnesota, but when I graduated from Benedict College in 1965, I wanted to enhance my skills as a business person. So I reflected and decided to go to law school. Because of proximity, I enrolled in the University of South Carolina because I wanted to stay home and be with my grandparents.

Evans: Proximity was definitely a factor for me, too, because I went here for undergrad. I love Columbia. I’ve enjoyed my time here and I think there have been so many people, including people like yourself, that have just been so wonderful and have been willing to share their knowledge. I was just not ready to leave.

Johnson: Well, I had some reservations back in 1965 because the first African-American to attend the University of South Carolina law school was also a Benedict graduate. He enrolled in 1964. Unfortunately, he did not make it after the first year. But I overcame that reluctance, and I was very fortunate to attend the School of Law.

Evans: And we’re all better for it.

Johnson: You’re very kind. It was quite a journey. In 1960, I came to campus to take the SAT. There were about five or six of us, as I recall, and we came to the University of South Carolina National Guard Armory. We entered the double doors and one of the proctors sort of zig-zagged through the other white students and said, “you, you and you,” pointing to the African-Americans. He said, “It’s going to be crowded in here. Come with me.” He took us down to North Main Street where we had to take the exam. Five years after that, I came back on campus at the same national guard armory and I took the LSAT and they did not remove me. In a five-year period, there had been a transformation here at the University of South Carolina.

Judge Jasper Cureton, who arrived here also in 1965, transferred from South Carolina State because they were closing down the law school. The dean at that time was Robert Figg. He looked at Jasper’s LSAT score and reacted by saying, “DAMN” because Jasper’s LSAT score was so high. He had the same reaction to my LSAT score, but for different reason. Mine was so low, he said, “DAMN!”

Evans: Speaking of Jasper Cureton, how well did you know him and Johnny Lake? Did you all have a relationship, given that you were the only three African-American students here?

Johnson: I had a relationship with Jasper. My recollection is that we only took one class together my second year and his third year. Johnny Lake I had very little contact with because he was here for a short period of time. I didn’t see him much, but my relationship with Jasper is longstanding. We remain very close friends and we talk on a regular basis. He certainly has been a role model as a judge.

Evans: What was the overall environment like? Were the other students friendly to you all? Were the professors friendly?

Johnson: I didn’t know there was such a thing as a friendly professor. Do they exist?

Evans: [laughing] I think they do.

Johnson: Well, contrary to the stereotype of the expectation, I did not experience any discrimination except for on a couple of occasions. If there was racism, it was covert instead of overt. You need to understand that I had a distinguished class. Two of my classmates, Jean Toal and Costa Pleicones, became the chief justices of the South Carolina Supreme Court. One of my classmates, Bob Sheheen, became the Speaker of the House. Several of my classmates became circuit judges. One became a congress person. Patton Adams became mayor of Columbia. A lot of my classmates were veterans, so they had had some exposure to African-Americans.

And I give credit to my grandfather and my grandmother. I grew up in a culture where you had an obligation to be nice to people, and so while I was the only African-American in the class, after a while I developed lasting friendships. I also think that my classmates saw in me a serious student. It’s no exaggeration, I studied seven days a week, day and night. I didn’t want to flunk out and embarrass my grandparents so I worked hard, and I think that hard work impressed people. But I had such wonderful classmates. I give them the credit.

I just recall two instances where there were obvious instances of discrimination. Back in those days, they had two student organizations. One of the organizations did not admit people of color, and so that was overt discrimination. I also remember taking a domestic relations class where one of the issues was miscegenation, inter-racial marriage. The professor had a whole list of relationships that were prohibited, but one that was condoned was that a white male could marry a black female. When he said that, I leaned over to my desk mate and I said to him, “I’m not going to let you marry my sister.” Apparently, a lot of people heard and everybody started laughing. At the end of that school year, that same professor, who I know did not have feelings that were pro-integration, came up to me and said, “You are the best thing that ever happened to this law school.”

Evans: I think that’s a great point because it gets at the heart of why diversity matters in the legal profession, in law schools and firms, and any education environment. It does have the power to break down barriers and build bridges.

Johnson: You are so right. That’s why I tell law students and younger lawyers that the practice of law is a combination of three things: what you know, who you know and who knows you. The most important of the three is what you know. The product that we sell is the knowledge of the law. We don’t sell cars, we don’t sell chairs, we don’t sell desks. We sell knowledge of the law. Who you know is also important because the practice of lawyers is based on relationships. Who knows you is very, very important.

The challenge in life is giving definition to your name, so when they hear your name, people will have positive thoughts. I used to tell people that you can tell that you have exceled as a trial lawyer by the whisper. When you walk down the hall, people say, “oh, that’s him, that’s him.”

Evans: Did you have many mentors once you started practicing?

Johnson: Oh, absolutely! That was the key. We were not competitors. I came out of the funeral business where the business was very competitive. Judge Perry, the late Lincoln C. Jenkins Jr., Hemphill Pride, Harold Boulware and Ernest Finney – all of them were mentors to me. They were of great assistance to me, in terms of giving me advice, because they were experienced and told me how to handle certain cases.

Evans: What advice would you give a soon-to-be graduate to help them be as successful as you have been?

Johnson: You’re very kind to say I’m successful. Let me say, if I’ve enjoyed any success, my success is nothing compared to your success. I am so proud of what you have achieved, becoming editor of the law review. Whatever I’ve done in my career as a lawyer is directly related to your success as editor-in-chief of the law review. I say that seriously, because they are not disconnected. There’s still an obligation in 2018 to disabuse the myth that African-American law students and African-American lawyers are inferior to their counterparts.

Evans: Well, thank you. That means a lot to hear that from you and to know that what I’ve been able to do here is important to you, because you are an inspiration to me. It really is amazing to be able to sit and talk with you and hear your perspective and your insight. I know that I speak on behalf of every other student here that we are grateful for not only what you did then, but also all the things you continue to do to help us, such as creating the I.S. Leevy Johnson Scholarship in 1997. Why did you decide to create it?

Johnson: Because law school is so expensive!

Evans: I can agree with that!

Johnson: It’s so expensive, and I wanted to enable some student who did not have the financial means but who had the skills. I consider it a real blessing that I’ve been able to make that contribution to this law school because I believe it’s an investment. I believe those students who receive that scholarship one day will graduate and pass the bar. That one day, their work, either directly or indirectly, will benefit me. It’s just like depositing money into an investment account. One day, I’m going to reap a benefit from it.

The conversation, conducted on April 5, 2018, has been edited for length and clarity.

Listen to the Full Interview 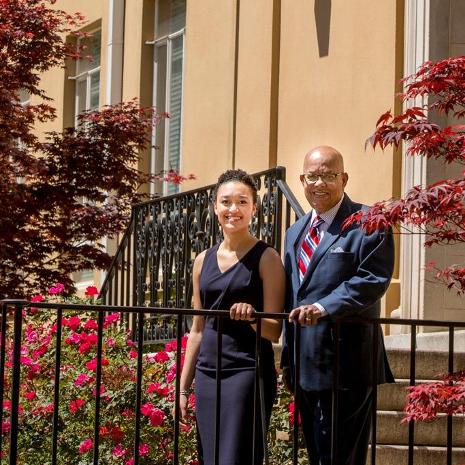 Photos of Chelsea Evans and I.S. Leevy Johnson, taken before their conversation on April 5, 2018.