Women in Law, a student organization of the University of South Carolina School of Law, raised more than $3,000 for Sexual Trauma Services of the Midlands through its 22nd annual WIL to Run 5k held in September.

“We far surpassed our goal, raising more than $1,000 over last year’s race, which was really exciting,” says Taylor Voegel, WIL treasurer and event coordinator. “It’s incredible to participate in an event that has such a long-standing history at USC Law, and also gratifying to see how it continues to grow.”

Every year, money raised from the race benefits STSM, the only sexual trauma services provider in the Midlands. One of the ways the increase was made possible was through a change of venue.

“This year, we moved the race to a new location at Timmerman Trail in Cayce, South Carolina,” says WIL president Patricia Morr. “The new location provided the runners a scenic route, and also allowed us to cut down on costs, which in turn meant more money for STSM.”

“Both the legal and business communities do a great deal to support this race each year,” Voegel says. “Law firms and other organizations, such as the South Carolina Women Lawyers Association, give generous donations financially that cover the costs of the race and benefit STSM. Local restaurants and other businesses typically give in-kind donations such as gift cards to serve as prizes for the 5k.”

The race featured more than 100 participants, including university students and faculty, as well as members of the community.  All skills levels were welcomed, from avid runners—including the Northside Christian Academy track team—to walkers with strollers and dogs.

The law school was well represented in the winner’s circle with Professor Clint Wallace coming in second overall, first for his age group, and as the fastest stroller—all while pushing his two children in their stroller. Third-year student Kendall Crawford also won her age group division. Several other law school winners included students Joshua Martin and Jessica Shultz, and Professor Marcia Zug.

With the growing support from members of the community and the law school, Women in Law has high hopes for continuing the race for years to come.

“This event has been a law school staple for 22 years,” Morr says. “It’s a great way for students, faculty, staff, and the community to work together to show support for a great cause. I can’t wait to see how the next generation of Women in Law members carries WIL to Run into the future.” 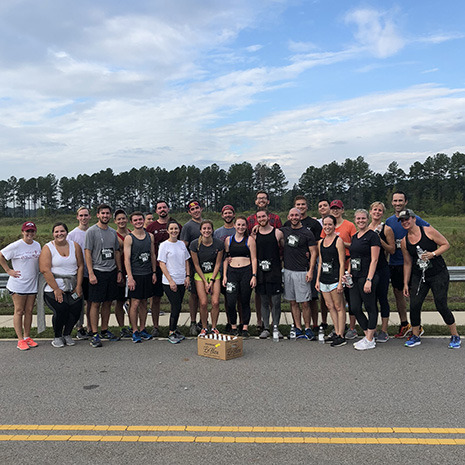 South Carolina Law student, faculty and staff at this race.