Bennett Gore to be honored for military service

Finding a hero in a new pack of baseball cards is what every card collector hopes for.  This year, Fireflies fans will find 30 of them—including a South Carolina Law faculty member—in the 2019 Military Heroes Baseball Card set.

Clyde “Bennett” Gore Jr., director of the University of South Carolina School of Law’s Veterans Legal Clinic and 2005 alumnus, was chosen to be one of 30 military members featured by the Columbia Fireflies for their second annual Military Heroes Baseball Card set.  The cards will be given away to the first 1,000 attendees of the May 30 matchup against the Augusta GreenJackets.  Each spring, the Columbia-based Class A minor league baseball team accepts nominations from the community as a way to honor the Midland’s veterans and active and reserve duty service members.

“When I saw the Fireflies search for local veterans for this year’s Military Heroes Baseball Card set, Professor Gore was the first person I thought of,” says recent South Carolina Law graduate Dana Maurizio.  “I nominated him not only for his service, which is greatly appreciated, but also for his diligence and dedication in aiding other veterans through the Veterans Legal Clinic.  Professor Gore is familiar with the difficulties that veterans face.  Through the clinic, he teaches students the importance of legal representation for veterans and ensures South Carolina veterans actually receive that representation.”

“My daughter will think her dad is the coolest guy ever,” Gore says with a laugh. “I’m very honored to be featured among so many deserving individuals and grateful for all the opportunities I have to give back to our community.”

Gore entered active duty as a JAG officer in January 2006, shortly after graduating from South Carolina Law. Staying on active duty through August 2014, he was assigned to a wide variety of places including Fort Bliss, Texas; White Sands Missile Range, New Mexico; and Fort Polk, Louisiana. He also was deployed to Iraq from July 2010 to July 2011. In addition to directing the clinic, he also currently serves as the Command Judge Advocate for 59th Troop Command of the South Carolina Army National Guard.

Gore has been integral in the development and success of the Veterans Legal Clinic, which will celebrate its one-year anniversary this July. South Carolina Law created the clinic in 2018 as a way to provide solutions to some of the unique legal needs related to veterans’ service. The clinic can help with a variety of cases, including obtaining and retaining employment, housing and homelessness issues, consumer protection, and domestic issues.

“Through our efforts we hope to stabilize veterans and the communities they live in by resolving their legal issues, so they can continue to have positive impacts on their communities," Gore says. "In short, we are hoping to make South Carolina a better place, one veteran at a time.” 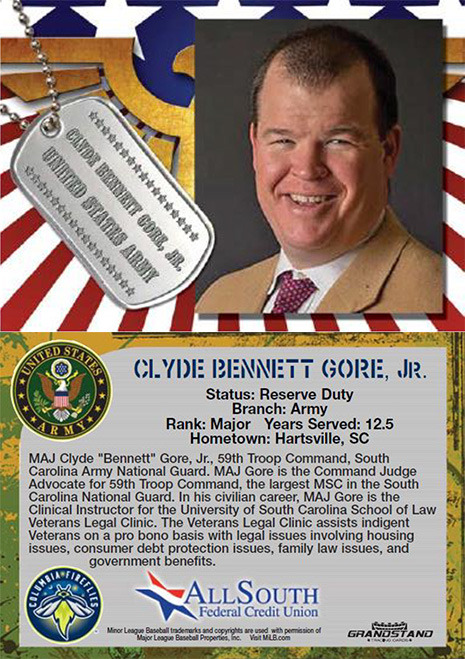 Clyde "Bennett" Gore Jr. is one of 30 South Carolina veterans to be honored for his service with his own baseball card from the Columbia Fireflies.