South Carolina Law hosts a production of "A Passion for Justice: An Encounter with Clarence Darrow"

On Monday, Feb. 11—for one night only—the Judge Karen J. Williams Courtroom at the University of South Carolina School of Law will transform into a theatre.  Fittingly, it will do so to tell the story of one of the most revered American trial lawyers who was well-known for his courtroom theatrics—Clarence Darrow.

In the one-man traveling production, A Passion for Justice: An Encounter with Clarence Darrow, professional actor Paul Morella portrays the legendary defense attorney’s most emotional and explosive summations, his pleas for mercy, and the showdown with William Jennings Bryan on the teaching of evolution from Darrow’s most famous case, the 1925 Scopes “Monkey” Trial (TheState of Tennessee v. John Thomas Scopes).

The play was crafted primarily from Darrow’s own words, allowing audiences to hear verbatim his arguments not only in Scopes, but other famous courtroom arguments including from the Leopold and Loeb trial and the landmark 1925 civil rights trial of Ossian Sweet.  However, the play also explores the darker side of Darrow, examining the McNamara trial in which he was accused of bribery and jury tampering.

According to Morella, Darrow is one of the most fascinating of all-American figures as a case study on ethics – not merely legal ethics, but ethics itself – the nature of right and wrong. He only grudgingly obeyed any rules and was always eager to aim directly at the grand purpose of a struggle, with little interest in the carnage along the way.

But perhaps Darrow’s greatest and most lasting contribution was his recognition that the courtroom was a powerful tool for social policy and change. His most celebrated and remembered cases involved issues that extended far beyond the interests of particular clients to the future of American society and justice.  And his powerful defenses of freedom of speech, integration, and fair labor practices, combined with his passionate attacks on intolerance, capital punishment and abuse of power are as timely, relevant and resonant today as they were back in his time.

The production is sponsored by the South Carolina Chapter of the American Board of Trial Advocates. 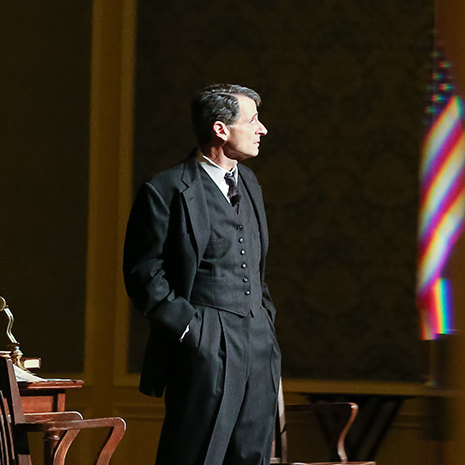 A Passion for Justice:

An Encounter with Clarence Darrow

FREE to attend, but seating is limited.

Tickets must be reserved to guarantee a seat