Mock Trial team ranked No. 4 in the country

South Carolina Law’s Mock Trial team is currently ranked No. 4 in the country, up nine spots from last year’s already impressive No. 13 ranking. The team is also ranked as one of the overall top 10 teams since 2016, according to Fordham University School of Law’s Trial Competition Performance rankings for 2018-2019.

It's an impressive feat on its own, made all the more impressive by the fact that the program was almost eliminated 11 years ago. In fact, the team’s success rests on a foundation built primarily by two alumni of the program — Joseph Bias ’10, general counsel for Midlands Technical College, and Brett Bayne ’11, an attorney with McAngus Goudelock & Courie, LLC.

In 2008, as the country entered the Great Recession, university budget cuts threatened the program’s very survival. Bias, then a second-year student, pushed for funding from law school alumni to keep the team alive.

“I was in a situation where we were devoid of resources but full of passion for the law and the school, so we had to be creative about how we used time and money to be able to keep the program alive,” Bias says. “The alums we reached out to were very supportive. As trial lawyers, they understood the need for us to develop advocacy skills before a case dropped in our laps as associates.”

Then in 2013, Bayne took the reins as advisor and head coach, putting the team on track to becoming the national contender it is today.

“Brett really took the ball and ran with it, and now the Mock Trial program is an integral part of a future trial lawyer’s education at USC,” says Bias, who still actively volunteers with the program. “He’s done a superb job of keeping former team members, like me, engaged. I think that input and involvement has been instrumental in helping the competition teams advance to their lofty heights.”

Of course, the wealth of talent and unflagging dedication of the team’s members doesn’t hurt either. As their reputation has grown, earning a spot on the roster has become a highly coveted honor.

Each year, about 50 second-year law students compete for approximately 22 spots on the team. Hopefuls must put in hours and hours of time and research, building an entire case from start to finish and competing in a rigorous trial setting where they are evaluated on their trial skills, performance and potential. Skilled elocution is a must.

If the tryouts sound daunting, they are meant to be. Those lucky enough to make the team are then expected to spend at least 20 hours each week on team scrimmages, researching and drafting trial materials — on top of their regular academic workload.

“Practice makes perfect,” Bayne says. “To be good, you have to put in the hard work, time and energy.”

And the team is good. The hours of practice and grunt work produce high-performing individuals like Megan Rudd, a 2019 graduate and team standout. In a competition that Bayne notes as one of this season’s biggest highlights — the national championship round of the Mockingbird Challenge Invitational — Rudd helped lead her team to victory in six tough rounds against the best teams in the nation. She also was named Best Overall Advocate at the Puerto Rico Trial Advocacy Competition, and Outstanding Advocate at the National Trial Competition Regionals — a win that secured South Carolina Law’s spot at nationals.

Overall, the program has notched nine regional and national competition victories and more than a dozen “best” or “outstanding advocate” awards since Bayne began coaching.

So, where do they go from here? Bayne foresees the team broadening its horizons by entering more out-of-state competitions and increasing the recognition of both the team and South Carolina Law, with more wins.

“Our goal for this coming year is the same as every year — to try the case we wanted to try at the competition and, in so doing, improve as advocates,” Bayne says.

Of course, the team has set its sights on attaining the crown jewel of the competition circuit — the national championship at the National Trial Competition, a goal he says the team has had from the beginning.

But the ultimate objective is one that Bayne, as an alumnus of the program and a practicing attorney, understands from experience: The invaluable opportunity Mock Trial offers students to exercise the legal knowledge they learned in the classroom and the acquisition of skills that can only be gained from experience in the courtroom.

“Winning is great, but my primary goal is to graduate 20 to 25 3Ls each year who are among the best trial advocates in the state on the day they walk across the graduation stage,” Bayne says. “If we accomplish that goal, we’ve won, regardless of the competition results.” 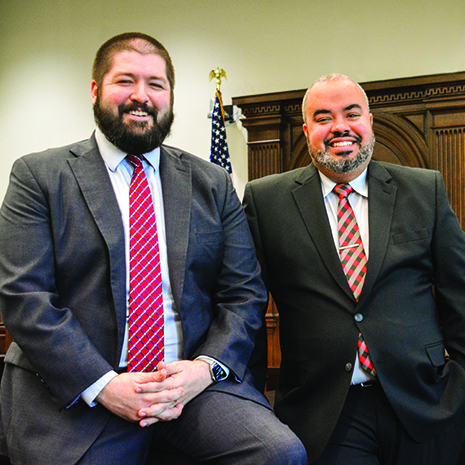 Brett Bayne and Joseph Bias are the two alumni who are primarily responsible for revitalizing the Mock Trial program. 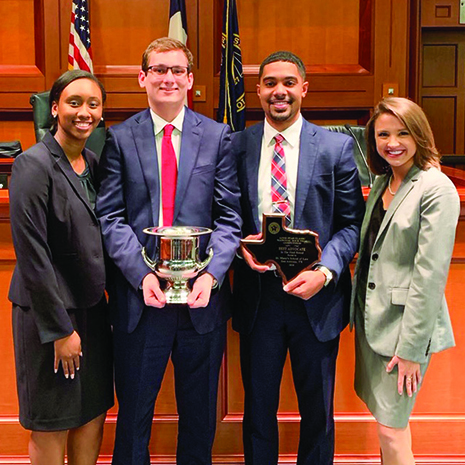 In February, Alex Sloope, Jake Hofferth, and Chris Paschal advanced to the national round of the National Trial Competition after taking the top spot in the regional round.

Other UofSC Law teams made it to the semi-finals of the Mockingbird Challenge National Trial Competition and the Palmetto State Classic Mock Trial Competition. In all three, a South Carolina Law student received either a Best Overall or an Outstanding Advocate award.