In their first-ever attempt, students from the University of South Carolina School of Law made it to the quarter finals of Tulane University’s Professional Football Negotiation Competition this January.

Out of a field of 48 teams representing 39 law schools across the country, the team of Justin Lawson, Patrick Dowling, and Hunter Pope was one of the final eight still standing on the final day of the competition on January 25.

The team’s quarter final placement is all the more impressive considering that—unlike most other teams—they had no faculty advisor or instructor to help consult or guide them through each round.

“I wasn’t able to go during my 1L year, but I knew it was something I really wanted to try,” says Justin Lawson, a second-year student from Houston, Texas, who now calls Blythewood, South Carolina, home.  “So when it rolled around again this year, I talked with Patrick and Hunter who are also into deeper football analysis like me, and we decided to just go for it.”

While Pope and Dowling admit to an intense interest in football, and closely followed NFL free agents and their contract negotiations, Lawson says that prior to enrolling at South Carolina Law, he worked for two different NFL agents.  He says the highlights of these experiences included analyzing and generating nearly all of the data points for contract negotiations for two players, Devonta Freeman of the Atlanta Falcons and Duke Johnson of the Cleveland Browns (now with the Houston Texans).

“My UofSC Law experiences definitely helped throughout the competition,” says Lawson. “The first stage is a ranking brief used for seeding the tournament. The training we had in citing and style in our Legal Research and Writing courses really helped our team as we prepared our advocacy briefs.  Additionally, I was blessed to take Drafting Business Agreements with Professor Leventis—one of the most practical and important law school courses for transactional work, in my opinion.”

Dowling and Pope also agreed that their law school experiences played a large role in the team’s success.

“Each round of negotiations was timed, so adequate preparation was crucial to help us think quickly and respond to proposals from the other side. Law school has definitely taught me the importance of preparation and how to think quickly under pressure,” says Dowling.

“The skills I learned in how to present and defend your arguments was essential for this competition because the scoring factored in both substantive arguments as well as each team’s negotiation style. The feedback we received following each round reinforced what I had learned, and will help me become a better advocate,” says Pope.

For Dowling and Pope, the competition was a great way to put into practice and strengthen the skills they’ve already learned for representing clients, and each would love the opportunity to someday work in the sports law field. But for Lawson, it means he’s one step closer to achieving his dream.

“I’m so glad to have had the opportunity to participate in this competition. My law education and this practical training experience are moving me closer to my ultimate career goal of representing players as a certified NFL Contract Adviser.” 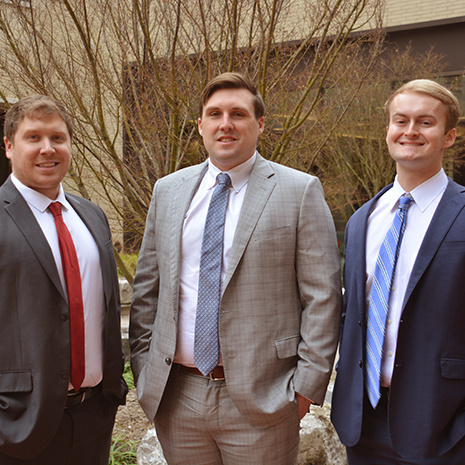