In December 2020, the United Nations’ World Food Programme was honored with the Nobel Peace Prize for its ongoing efforts combating world hunger. For WFP executive director and University of South Carolina alumnus David Beasley, accepting the Nobel Prize on behalf of his team is a chance to raise awareness and underscore the ongoing need for humanitarian efforts and strategic foreign aid.

Beasley, who transferred to South Carolina from Clemson after he was elected to the state legislature, at age 20, graduated from the university in 1979 with a degree in interdisciplinary studies, and from the School of Law in 1983. He served more than 15 years in the state legislature before being elected governor of South Carolina in 1994. In 2017, former South Carolina Governor and then-U.S. Ambassador to the United Nations Nikki Haley recommended Beasley to head the U.N.’s World Food Programme, which is headquartered in Rome.

Just after Thanksgiving 2020, Beasley spoke to Carolinian magazine while en route from his family home in Darlington, South Carolina, to Washington, D.C.  The following Q&A is an excerpt from that interview:

Let’s start by getting a sense of scale of the hunger crisis — when you took office in 2017 and now, going into 2021. Also, give us a sense of your role and your approach to leadership.

When I was asked to take on this role, there were four nations facing famine, and the largest donor to the World Food Programme was the United States. Trump had just taken office, and everyone was assuming he was going to zero out the budget. So there I was, being asked to take on this role, with the largest donor, the United States — at about $1.9 billion, or about 35 percent of the budget — talking about pulling out. Who would want that job? [Laughs]

But we were able to convince the United States not to back down on its commitment to effective and strategic foreign aid and we were able to avert the four famines. I call it the Miracle on Pennsylvania Avenue. We were able to bring both ends of Pennsylvania Avenue together — from the White House to the Capitol — and we were able to bring the Republicans and the Democrats together. Though they are, in fact, fighting on everything, when it came to strategic foreign aid and the United States’ national security interests, the Republicans and the Democrats laid aside their differences and supported the World Food Programme.

Is the job what you expected when you signed up?

When I was first approached about the World Food Programme, I knew very little about it. My knee jerk reaction was more about the U.N. system — from an outsider’s perspective. I had a high standard and high hopes for the U.N., but my limited knowledge of the U.N. was that it was not being as effective as it should be or could be. I had to ask a lot of people a lot of questions. But everyone was telling me, “Oh my gosh, the World Food Programme is different. They’re efficient, they’re strategic, they get it done, they’re not bureaucratic.” And a lot of people said, “You know, you’re the only one who can talk the U.S. out of cutting funding. And if you don’t, we’re going have destabilization, war, conflict and mass migration.”

You started your own political career as a Democrat, then switched to the Republican Party. Right now, those two camps are pretty divided. To what do you attribute your ability to reach across the aisle?

But no, really. Having been a United States governor, working with the House and the Senate in South Carolina, and having taken on some of the most contentious issues in our state’s history — that, coupled with the relationships that I developed as a United States governor, helped prepare me to deal with global issues. And having grown up in rural South Carolina helped me understand agriculture. Having grown up during the civil rights movement in a rural, high-minority area helped me understand the plight of minority populations and helped me understand the impact of poverty.

Talk a little bit about that — your childhood, how it prepared you for a role like this, growing up in Darlington County.

A little town called Lamar. Both of my parents are now deceased, but both were ardent supporters of the public school system. And Lamar went through an extremely violent, volatile time. When people turned over school buses [during desegregation] it was global news. And that was my school. Literally, almost all of the whites left the public schools after they created these private schools.

My mother and father kept us in the public schools, stayed with it, and that’s where I developed some of the greatest relationships in my life, relationships that helped shape me as to how I see people— that we’re all equal, we’re all brothers and sisters, and I’m no better than you. That was ingrained in me by my mother and father — my father, who served in politics, and my mother, who never missed an opportunity to say what she thought.

I think growing up like I did prepared me for going someplace like Chad, or anywhere, and realizing, these are our brothers and sisters. They’re suffering, we’re suffering. I consider it an honor to know these people. They teach me a lot about life. They have very little but yet they have hope.

I think growing up like I did prepared me for going someplace like Chad, or anywhere, and realizing, these are our brothers and sisters. They’re suffering, we’re suffering. I consider it an honor to know these people. They teach me a lot about life. They have very little but yet they have hope.

As a Republican governor, you were a big believer in private sector solutions. Is that still your philosophy with the WFP?

Listen, this is a great question. One of the things that I have found is that the U.N. had, to some degree, neglected the private sector for quite some time. I believe there’s a renewed spirit among leadership at the U.N. that is encouraging the private sector to step up. My firm belief is that you cannot solve the problem of poverty without the private sector’s engagement. And I don’t mean just from a philanthropical perspective but in terms of investments, job creation and the entrepreneurial spirit.

When I was a United States governor, I created special tax credits and incentives for the rural, repressed areas so that they could have job creation and not need outside job support but would be sustainable and could take care of themselves. That’s my goal now, to take that same philosophy — How do we help the poor, break them out of poverty, and do it in such a way that it’s sustainable and they experience freedom and empowerment? How do we empower them and not create more dependence?

So, what did it mean for your work with WFP to be recognized with the Nobel Prize?

The Nobel Peace Prize committee was sending two very clear messages. One was a matter of fact — ‘Thank you, World Food Programme, for your men and women who put their own lives on the line every single day to bring peace and stability to people who are on the brink of starvation.” Number two was a prophetic message, and that is, “Your hardest work is yet to come.” Because, looking at 2021, we’re going to have a literally catastrophic year if we don’t have the funding we need.

Just how bad is the outlook going forward, with the pandemic ongoing?

We’re facing famine of Biblical proportions. If we don’t receive the funding that we need, you will have famine, destabilization and mass migration. The reason we didn’t have it the last three years was because our donors stepped up — donors like the United States and the American taxpayer—and said, “We care.”

Look for the full story, which will appear in an upcoming edition of Carolinian. 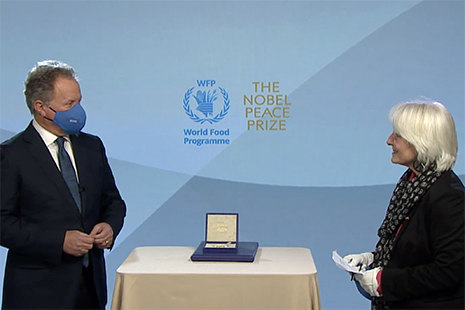 View brief highlights from the Nobel Peace Prize ceremony and learn more about the work the WFP performs around the globe.