The University of South Carolina School of Law’s Class of 2024 will once again be one of the most academically accomplished in school history, exceeding its metrics over last year.

The 214 members of the incoming class have median LSAT and GPA scores of 158 and 3.53 respectively, continuing the trend of improving the entering class’ academic profile every year since 2017. Notably, the 75th percentile LSAT score is 160.

Among students who disclosed their gender, there are more female students (52.1%) than male students (47.9%) for the second year in a row. Forty-two students (20.6% of the class) self-identified as members of an underrepresented minority group, up from 18% a year ago.

While the national applicant pool among all law schools was 12.9% higher than last year, South Carolina Law saw a 27.4% increase, with 1,746 prospective students applying. The entering class was selected from applicants who are from 47 states, Canada, China, Germany, and the United Kingdom.

"We could not be more pleased with the talented and committed class that has matriculated. They have already shown their commitment to the well-being not only of themselves, but each other," says William C. Hubbard, dean of the School of Law.  "The law school's mission is to prepare lawyer-leaders to serve their communities. This class represents the qualities of character and scholarship that propel that mission."

“This year presented different opportunities and challenges, but COVID concerns still shaped the decisions of our students and our preparation for their arrival” said Karen Reagan Britton, vice dean for admissions, career and professional development, and student affairs.  “We are so pleased by their enthusiasm as they meet each other, our faculty and staff, and their peer mentors and head to class together for the first time. Our efforts to compose a talented and diverse class have paid dividends with their arrival.”

South Carolina residents made up 58.4% of the class, while non-residents made up the remaining 41.6%. Members of the entering class come from 26 states, as well as Canada, Germany and the United Kingdom.

The class reported 52 academic majors in their undergraduate studies. The traditional majors of political science, English and history were well represented, as were majors in various business disciplines (economics, marketing, finance). A number of STEM majors including psychology, biology, sociology and chemistry were also well represented. Several members of the class bring the benefit of advanced degrees and notable careers to the classroom. 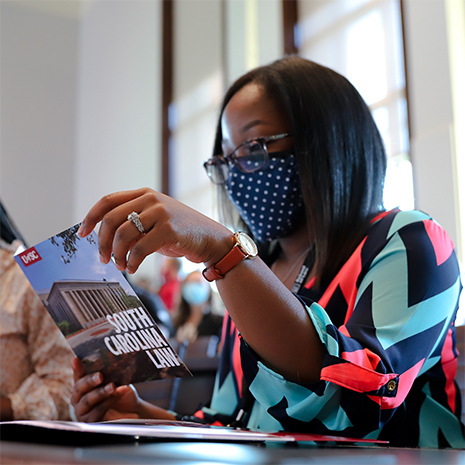