On a Friday afternoon in early June, an unexpected phone call broke the silence and Sulaiman Ahmad’s concentration as he worked to put the finishing touches on the draft of a legal memo.  But the initial annoyance at interruption quickly led to disbelief and then elation.

On the other end of the line was the Office of the Vice President of the United States—and an invitation to be part of a face-to-face meeting with the vice president during her visit to Greenville, South Carolina, to discuss voter registration and strengthening the nation’s election infrastructure.

It was a once-in-a-lifetime opportunity, and I couldn’t believe that I would have a chance to meet her at all, much less to talk about something I’m so passionate about.

“I was informed that Vice President Kamala Harris was interested in speaking with voting rights activists and that my name had come up,” says Ahmad, a second-year student at the University of South Carolina School of Law.  “It was a once-in-a-lifetime opportunity, and I couldn’t believe that I would have a chance to meet her at all, much less to talk about something I’m so passionate about.”

It wasn’t just luck that provided this opportunity.  Ahmad believes he was one of three South Carolinians chosen to meet with the vice president because of his history of helping secure the rights of all citizens to vote.

His first—and most pivotal experience—came in 2016, during his junior year at Furman University, when he sued his hometown of Greenville, South Carolina, over unfair voter registration practices that restricted some students’ right to vote.

“I was working on a Get Out the Vote project when I discovered that out-of-state students were being forced to fill out a questionnaire with irrelevant questions such as where they went to church and the address listed on their fishing license,” says Ahmad. “I spoke with a professor who told me about previous Furman students who had tried and failed to remove the restriction, but I was determined and decided to take action.”

Ahmad, along with two out-of-state friends who had both been denied the ability to vote in the Palmetto State, worked with the South Carolina Chapter of the ACLU to file the lawsuit in September 2016. Just weeks later, a judge issued an injunction that stopped the use of the questionnaire by Greenville County and granted the students the right to vote.

This experience showed me that lawyers are capable of being changemakers. I was inspired by the lawyers who fought for me, and I knew then that I wanted to go to law school and pursue a career protecting civil rights.

“This experience showed me that lawyers are capable of being changemakers. I was inspired by the lawyers who fought for me, and I knew then that I wanted to go to law school and pursue a career protecting civil rights.”

Bolstered by this experience, Ahmad continued to stay involved in voter registration issues. In 2018, he worked in Virginia for Let America Vote, an organization aimed at curbing voter suppression. In 2020, he worked for a Democratic presidential campaign where he says he saw issues regarding voter registration and turnout in South Carolina.

Ahmad was able to relay these experiences during his June 14 visit with the vice president and share some of his ideas for helping those who want to exercise their right to vote.

“The day was an absolute blur, but I believe my input was sincerely appreciated as the Vice President was attentive, took notes, and asked me particular questions, such as ‘What was your most impactful statement to a voter to encourage them to protect the right to vote?’” Ahmad recalls. “I told her that when speaking to voters in South Carolina, I mention how Ronald Reagan once said that the United States must be a ‘city upon a hill.’ But how can we be that city when we consistently rank behind Estonia and Mexico in terms of voter turnout?

“We cannot and must not let voting become partisan because voting rights are not a Democratic issue or a Republican issue. They are an American issue.” 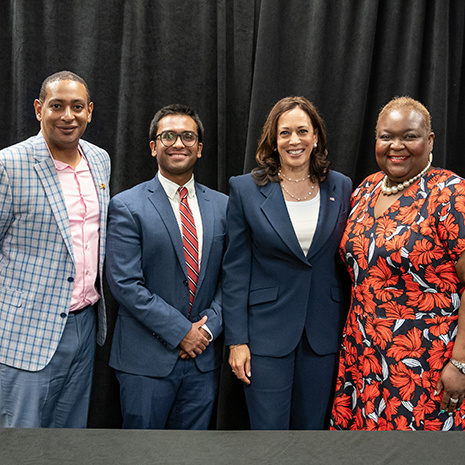