The School of Law welcomed American Bar Association (ABA) President Deborah Enix-Ross on Jan. 12 for a day with faculty, staff, and students, culminating in an evening keynote address at “Our Beloved Community:  The Rule of Law in an Unruly World,” the School’s inaugural event honoring Dr. Martin Luther King, Jr. Her keynote emphasized three cornerstones of democracy: civics, civility, and collaboration.

“Collaborating together, we can emphasize that Americans can listen to each other, we can accommodate differing – even passionately held – views, and we must appreciate these abilities for their essential role in maintaining the representative government and freedoms that can help guide us in our unruly world and give us hope in the realization of a beloved community,” Enix-Ross said.

The evening concluded with the presentation of awards to two South Carolina-based legal organizations that have demonstrated a commitment to public service, social justice, diversity, equity, and inclusion in the legal profession.

The Charleston nonprofit organization Center for Heirs’ Property Preservation received the Keeper of the Dream Award for its work helping families build generational wealth by protecting and keeping family land.

Prior to serving as ABA president – only the second Black woman to do so – Enix-Ross co-founded the Women’s Interest Network, served as vice president of the World Justice Project, vice chair of the International Bar Association’s Bar Issues Commission, and ABA representative to the International Bar Association. She also led an international exchange delegation to Liberia, Sierra Leone, and Ghana, where she delivered an address commemorating the country’s 50th anniversary of independence.

Enix-Ross has several connections to South Carolina. She grew up spending many summers in Bishopville, her mother’s hometown.

School of Law Dean and former ABA President William Hubbard has worked with Enix-Ross in the ABA for more than 30 years.

“She is such a wonderful representative of Dr. King’s legacy, and we’re so proud to have her here tonight,” Hubbard said when introducing Enix-Ross on Jan. 12. “Her strengths as a leader have always been articulating what needs to be accomplished and the ability to bring people together to accomplish those goals.” 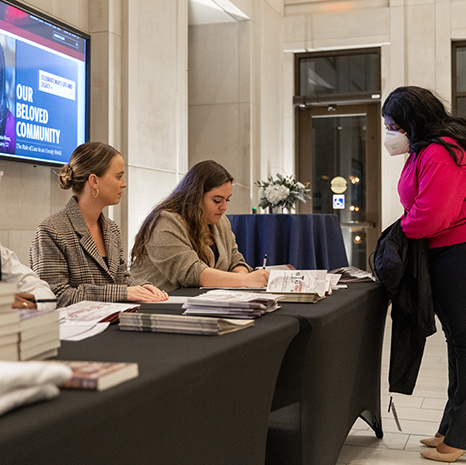 Members of the legal community, faculty, and students attend an evening keynote address by Deborah Enix-Ross.