The first sound history of 9/11

Millions of words have been written about 9/11. Writers have told the story of the September 2001 terrorist attacks from countless angles: politics, arts, culture, religion, psychology and more.

But until now, no one has looked at the way it changed hearing for New York City residents.

The scholar breaking the silence is Allie Trice, a senior history and English major at the University of South Carolina. Her senior paper, “Listening to 9/11: Toward an auditory history of a catastrophe,” recreates the Manhattan soundscape before, during, and after the attacks. Trice shows how the sounds of 9/11 interrupted the city's normal clamor, introduced a deafening silence, and changed the way New Yorkers experienced sound.

The paper reveals a previously ignored impact that 9/11 had on individuals. “9/11 changed America in so many ways,” Trice says “It changed politics. It changed international relations. But I never thought about or heard about the way it affected the people there, even down to their senses. The way their brains and ears worked was different.”

Originally from Charlotte, North Carolina, Trice chose her majors because of an enduring interest in writing, literature, and ancient history. “If I'm doing a lot of reading and writing, I might as well read and write about what I love,” she says.

People didn’t just see things. They also heard them and smelled them and touched them.

A year ago, she took a United States history course from Mark Smith, who brought up the topic of sensory history ― the exploration of historic events through all five senses.

Smith, the author of a book about the sensory history of the Civil War, says the sensory approach evokes a more complete picture of how people experienced the past, including how the senses shaped historic events. "I look at smell, sound, touch, and taste,” he says. “My aim in sensory history is to invigorate the nonvisual senses to understand how people experienced the past. … People didn’t just see things. They also heard them and smelled them and touched them.”

Trice was always the type of student to stay after class and ask insightful questions, but sensory history piqued her interest repeatedly. It intrigued her so much that she asked Smith if she could help him with some research. He turned the offer around; he wanted to help her on her own project. He recommended that she apply the sensory lens to 9/11, since he had seen no research on it.

Trice was unsure at first. “That doesn’t seem like history; that's in my lifetime," Trice recalls saying. But Smith encouraged her to break new ground.

A Capstone Scholar, Trice received a Magellan Research Apprentice Grant to support the project. Then she searched online databases to find articles that talked about New York City and sound. She scoured articles for words like “noise,” “boom,” “crash” and “hear.”
The sources piled up quickly.

Then she focuses on the way people described the sounds during the attacks: explosions, crashes, shattered glass, falling elevators, feet pounding down the World Trade Center stairs.

Last, she studies references to sound in the months following the attacks. She says she noticed two big changes. First, as silence settled over the city, there was no longer a consensus judgment of the noise level. Before the attacks, reports about noise were unanimously negative. But after the attacks, feelings toward silence were split. “Some people needed the silence. It was a reprieve," she says. “Other people hated it. It felt unfamiliar.”

Second, she saw that New Yorkers had new experiences with sound. Some people reported auditory flashbacks and phantom explosions. Others described trauma sparked by sounds as simple as an airplane flying overhead ― sounds they might not have noticed above the city’s noise before 9/11.

It affected the people there, even down to their senses. The way their brains and ears worked was different.

Trice hopes the paper helps her readers develop a personal connection to the people who experienced the attacks firsthand. It did that for her. “As I became more intimately knowledgeable of these people's lives, I feel like I'm on a first name basis with these survivors,” she says. “I feel like I know them.”

Smith is thrilled with Trice’s work, and he told her the paper deserves to be presented and published.

The organizers of a national humanities research conference at Johns Hopkins University agreed with Smith. They invited Trice to present at the conference in April. Even though the outbreak of COVID-19 has caused the conference to shift to an online format, Trice has a national audience for her work.

Trice will finish her undergraduate degree in December 2020. She plans to pursue graduate school in history, but she’s unsure what her focus will be. She’s always loved ancient history. But her 9/11 paper has opened her to new ideas.

“This really made me love studying recent history," she says. “History is not just thousand-year-old things. It can be a 20-year-old thing.” 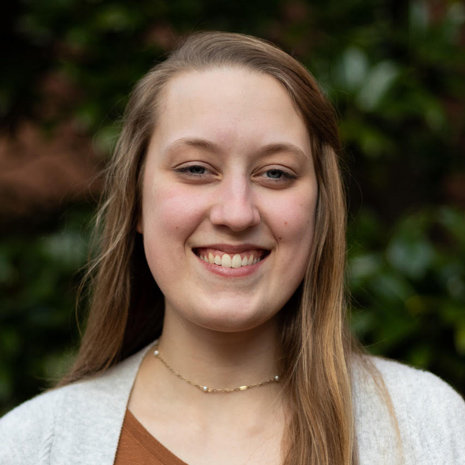 Allie Trice's senior paper reveals how the terrorist attacks of September 11, 2001, impacted the sounds of Manhattan and the way New Yorkers experience sound.