Thomas J. Brown, a history professor at the University of South Carolina, has won a national award for his new book about Civil War monuments and American culture. 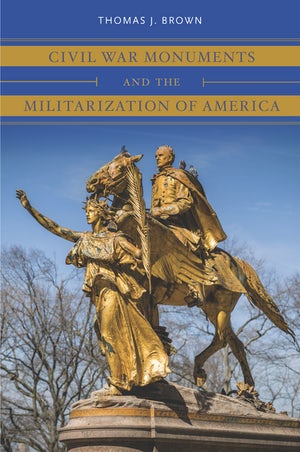 Civil War Monuments and the Militarization of America explores the history and context of statues and other memorials, both North and South. According to Brown, those monuments changed the way Americans thought about the military and about war.

“It begins to be valorized as something that would make you better, rather than something that had to be done from time to time," Brown says. “The military developed a much more positive image in the United States through these monuments.”

Earlier in U.S. history, the American public was suspicious of standing armies and military might, Brown says. Although George Washington and other presidents proved their leadership capabilities in battle, the common soldier found armed service as a gateway to drinking or gambling. "For most it was a field of temptation,” Brown says. “It was seen as a moral hazard."

Even though the Civil War mobilized a tremendous number of people into military combat, it did not alone alter America’s view of military participation, Brown says. Instead, the change happened as cities, towns and states across the country chose how to memorialize the war. With statues of soldiers erected and messages inscribed in stone monuments, the culture opened its arms to the ideals of military service.

It begins to be valorized as something that would make you better. ... The military developed a much more positive image in the United States through these monuments.

“Before the late 19th century, the farmer was held up as your prototypical citizen,” Brown says. Thanks to Civil War monuments, “the soldier replaced the farmer.”

Brown’s new book explains how the monuments changed culture, which then influenced the way the United States got involved in World War I. It also explores how the memorials reinforced a race-based class system and how recent activism has focused on removing monuments honoring Confederate soldiers.

Civil War Monuments and the Militarization of America was published in 2019 by the University of North Carolina Press. Last week, the Society of Civil War Historians named the book as the 2020 winner of the Tom Watson Brown Book Award, recognizing it as the best book published on the causes, conduct, and effects of the Civil War. According to an announcement from the society, the book is “meticulously researched, cogently argued, and elegantly written,” and it “fundamentally reconceives and enlivens the field of Civil War commemoration.”