Sharing the joy of research

Jane Roberts once heard her husband say, "Jane loves her work so much I’m pretty sure she would do it for free.”

She disagreed at first. But then she realized that he wasn’t entirely wrong. Roberts loves her job. Maybe that much.

“I get to be a scholar," says the University of South Carolina psychology professor. “I get to ask questions through my research based on what I think is most important. And then I get to share that opportunity and excitement with others. It's such a dynamic, compelling opportunity.”

Roberts is one of two professors named as 2020 recipients of the Carolina Distinguished Professorship, one of the highest honors awarded to South Carolina faculty. The position honors professors who show excellence in scholarship, a commitment to students and their colleagues and overall participation in the life of the university. As a recognized scholar in neurodevelopmental disorders and a leader in cross-disciplinary research, Roberts clearly stands out.

At UofSC they were less interested in putting me in a specific field and more interested in the caliber of work and potential for collaborations.

She almost didn’t come to South Carolina, though. After earning her doctorate in early childhood special education, she spent 10 years doing research at her alma mater, the University of North Carolina. She assumed that she would spend her entire career there. In 2008 she applied to a psychology position at South Carolina, but she was only mildly interested. She considered canceling her interview.

But once she took a closer look, she was sold.

“I realized this was actually a unique place for me to be able to come and thrive," Roberts says.

The caliber of research on campus helped draw her, but so did the enthusiasm for her research focus that is a unique blend of school psychology, neuroscience and developmental psychology. “I sometimes don't neatly fit into boxes," she says. "At UofSC they were less interested in putting me in a specific field and more interested in the caliber of work and potential for collaborations.”

This was actually a unique place for me to be able to come and thrive.

Her research focuses on infant development and neurodevelopmental disorders, including Fragile X syndrome and autism. “I’ve always been fascinated by the why and the how of human development, especially with the causes and mechanisms of behavior,” Roberts says. “In my opinion, the best way to study that is to study early development.

“Infancy represents the very beginning of development. In some ways, it is a blank slate of development where you can watch things unfold in a way that is very pure,” she says.

Roberts involves her students in the research in several ways, often observing patients with neurodevelopmental disorders and recording data about their development. For the patients, this can lead to improved detection and treatments for the disorders. For the students, this often leads to achievements like having their papers published in peer-reviewed journals and acceptance into graduate and medical schools. “That’s very affirming and satisfying,” Roberts says.

I get to ask questions through my research based on what I think is most important. And then I get to share that opportunity and excitement with others. It's such a dynamic, compelling opportunity.

Roberts also collaborates across campus with professors in other disciplines. In 2019, she co-founded of the South Carolina Autism and Neurodevelopmental Disorders Center with biology professor Jeff Twiss. The center received startup funding from the university’s Excellence Initiative to support efforts to connect research ranging from the cellular level to treatment.

Roberts says it makes sense for scientists to work together to tackle questions about developmental disorders. Collaboration improves research methods and outcomes.

“By partnering with others in different disciplines, they can answer questions I have at a depth that's not possible if I don't collaborate,” she says. “The outcome is magnified through those interdisciplinary collaborations.”

Roberts joins 16 other College of Arts and Sciences faculty who have earned the Carolina Distinguished Professor recognition. In 2019, Hans-Conrad zur Loye and Claudia Benitez-Nelson were recognized with the honor. 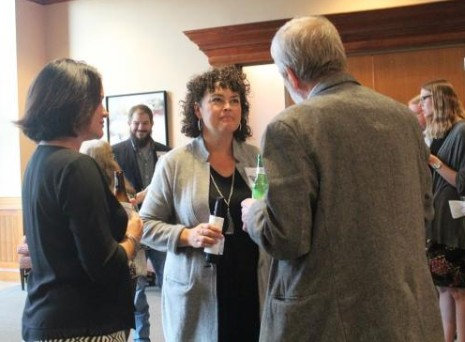 Better detection and treatment of developmental disorders begins with leadership. Jane Roberts works with people across campus and throughout South Carolina to improve collaboration on research.

Learn more about her lab.