The monsoon season of 2019 brought the perfect storm for Heather Roman-Stork.

The oceanography graduate student wanted to find more research to do with satellite data. Last year’s monsoon surprised forecasters with widespread flooding that displaced millions of people, giving Roman-Stork a real problem to help solve. Because it was different from any other monsoon in recent memory, it gave her plenty of data to contrast.

Now, her research could give weather forecasters and emergency planners a new tool for predicting India’s monsoon season: Salt.

“If you can measure ocean salinity, you can predict the monsoon onset,” when it will start and how heavy it will be, Roman-Stork says. 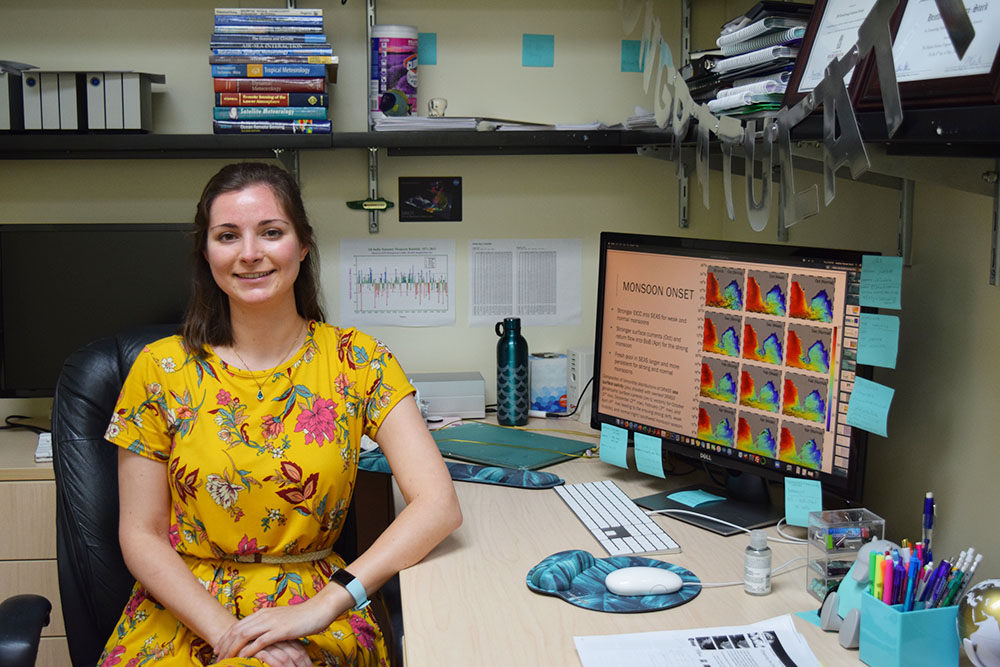 Roman-Stork always knew she’d become a scientist, and although her interests began with a childhood rock collection and an environmental geoscience undergraduate degree, the ocean won. She loves its cross-currents between meteorology, physical sciences and the ability to use satellites for research.

But more than 100 inches of snow (when she went to college in Boston) and a hurricane (during graduate school in Florida) convinced Roman-Stork that she’d rather study bad weather from a distance. That brought her to the University of South Carolina for her Ph.D., where she has used satellites in space to study the ocean.

It’s clear that Roman-Stork is passionate about her work. She’s in the lab six days each week, digging into data that satellites gather around the globe. While earning her Ph.D. in only two years, Roman-Stork has published 11 scientific papers, with several more in review now. In contrast, most doctoral students publish only a few, said Subra Bulusu, her advisor. The department requires only one.

In December, Roman-Stork will begin working for the National Oceanographic and Atmospheric Administration, where she will track eddys — whirlpools in the ocean — for the agency’s Coastwatch website. Bulusu says it is rare for new graduates to go immediately into a science job at NOAA, but he’s not surprised that Roman-Stork is doing just that.

“She is one of our best students I have seen in my 15 years at UofSC," Bulusu says.

She showed that it is important to isolate salinities. That will improve the monitoring and predicting of the monsoons. That is why it’s groundbreaking work.

Roman-Stork says some of her research is like playing in a sandbox, looking at the satellite data available, exercising curiosity and finding a question the data answers.

When it came to studying monsoons, the question came first.

The monsoon season in southeast Asia became mild in the mid-1990s. During the long lull, scientists developed ways to measure salt concentrations from satellites, using infrared temperatures to measure changes that signal where salt water and freshwater are pooling. When the 2019 monsoon season bucked predictions for another mild year, Roman-Stork wanted to look for connections.

“We want to know why we haven’t had a strong monsoon since 1994. Can we use salinity to figure out why?” she says.

She studied historical data about saltwater concentrations, ocean currents, water temperature and other factors. The salinity measurements showed how water from the Bay of Bengal, which has lower salt content because it’s fed by large, freshwater rivers, flows around the tip of the Indian peninsula. She found strong evidence showing that when that water gathers in widespread pools in the Southeast Asian Sea, the monsoon is stronger. When the pool of freshwater remains closer to the coastline, the monsoon is weaker.

Her advisor was thrilled to see her results. Not only did she show a connection between salinity and monsoon strength, but her findings could improve forecasting models that had underestimated the 2019 rainfall.

“She showed that it is important to isolate salinities,” Bulusu says. “That will improve the monitoring and predicting of the monsoons. That is why it’s groundbreaking work.”

But her findings aren’t incorporated into forecasters’ models yet. As she uses satellites to monitor the ocean for NOAA, Roman-Stork plans to keep advocating for her research until salinity is considered in monsoon prediction.

She says Bulusu helps her remember the importance of continuing that work.

“He drives me to be the best I can be … and not to coast along,” she says. “Technically, I could have gotten my one required publication and called it a day. But he's driven me to not be complacent with what I’ve done, but to go further and do more.”