Fans of indie hits Juno and The Perks of Being a Wallflower now have a new film to look forward to.

And it’s being made by faculty and students from the College of Arts and Sciences.

A handful of Department of Theatre and Dance students, alumni and faculty have been hard at work on a full-length movie they will submit to premier independent film festivals like Sundance and South by Southwest.

Assistant professor of acting Dustin Whitehead, with his company Local Cinema Studios, is producing Holy Irresistible. The story centers around Ivy, a hilarious and troubled teen with a serious grudge against God. His literal partner in crime, Surge, is a self-proclaimed anarchist with a penchant for conspiracies. When Ivy meets Sadie, it’s love at first sight.

The problem? Sadie is the preacher’s daughter.

This story arc alone is enough to rouse fans of a good young adult romance and coming of age story. What will hook wider audiences, though, is Ivy and Surge’s plot to infiltrate and dismantle the church’s alleged funding of guerilla warfare in Bolivia.

What’s perhaps most impressive, though, is that more than half of the Holy Irresistible production crew are university students or recent graduates. The crew’s department heads are all industry professionals, but their assistants are interns. That’s because Whitehead designed Local Cinema Studios to be a pathway from academia into the film industry.

“The professionals have to teach them how to do their jobs,” says Whitehead. “It is a mentorship-based model, and it works very well. The learning and discovery help to create a positive ensemble mentality.”

Recent graduate Lilly Heidari worked as a production coordinator on the film. An English and theatre double-major with a film and media studies minor, she used her creative communication skills to coordinate logistics for the company and keep the shooting schedule on track, and even stepped in as the boom operator for a couple weeks.

“Dustin’s guidance and mentorship are such huge reasons for the spirit of collaboration and true teamwork that the entire cast and crew of Holy Irresistible experienced this summer,” she says.

Ten UofSC students and four faculty members from the Department of Theatre and Dance have coordinated on some aspect of Holy Irresistible. From script supervision to costuming and featured extras.

As a producer, Whitehead gave notes on rewrites, hired the director and other professionals on set, built internship opportunities and raised money for the film and to support the student interns. He helped secure locations and housing and played a significant role in casting the movie — casting which includes Orange is the New Black actor Lea DeLaria.

After a character rewrite turned “Uncle Rad” into “Aunt Rad,” director Pamela Corkey and the other producers targeted DeLaria for the role.

“We reached out to her with the new ‘Aunt Rad Draft,’ and she immediately got back to us,” Whitehead says. “She was over the moon about the script. Aunt Rad is a rough-around-the-edges type character that talks like an out-of-the-loop old man. It is a role built for her. And she did a wonderful job with it.”

On set with DeLaria was Jordan Postal, a May 2021 South Carolina graduate, who put her public relations and theatre training to use as an assistant production coordinator. Among a host of other things, Postal handles the film’s marketing photography and social media accounts. (Check out @holyirresistible.movie on Instagram.)

“I was able to bring in the knowledge of what it means to work as a collaborative team in order to make art,” Postal says. “Even though the process for film is much different than it is with live theatre, I noticed the same energy and passion behind it all.”

Screenwriters Andrew Shearer and Nicholas Sherman based the script for what would become Holy Irresistible on inspiration from growing up in a small town in North Carolina. Shearer says many of the situations he wrote into the script are anecdotes from his adolescence. Going to church to get the girl was one of them.

He hopes audiences come away from the film feeling entertained but also thoughtful.

“What I want them to take away on a more substantive level is that there is no one way to discover your own spirituality,” Shearer says. “It’s ok to give in to ideas or constructions that aren’t instinctive to you and that you resist because you are scared.

“I want people to come away thinking critically about the role of religion in our lives and how it is a different journey for every person.” 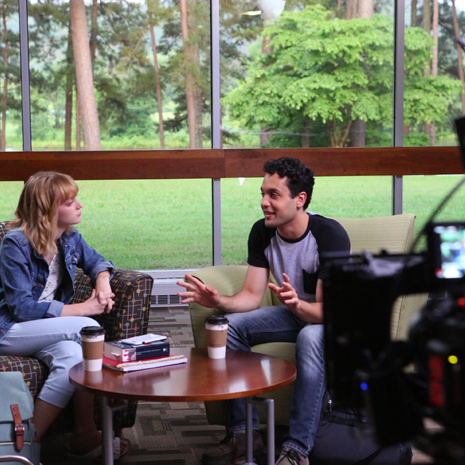 This story was part of the College of Arts and Sciences Fall 2021 alumni magazine. To read more stories from this magazine, visit go.sc.edu/CASMagazine.