Looking back on her time in college, Logan Hickey takes pride in proving herself wrong.

She came to the University of South Carolina thinking she’d blend in as an average student. And she had a challenging start, switching majors several times while she searched for the right fit.

But at the beginning of her junior year, she set a new goal: earn a 4.0.

When she scored a perfect GPA that semester, it opened the door to another opportunity. Sociology professor Mathieu Deflem asked her to work as his research assistant. The invitation surprised Hickey.

“I never thought that I would be the type of person that a professor would reach out to and extend an opportunity like that," Hickey says. “I didn’t think I had certain accolades that would lead me down the road to that.”

“So I proved myself wrong.”

Deflem asked Hickey to help with a study of how celebrities responded to the COVID-19 pandemic while the concerts, sporting events, and other activities that normally give them the spotlight were canceled. UofSC provided a grant to support the project, which Hickey appreciated. Considering the health risks of the pandemic, she wanted to leave her previous job as a waitress and do work while social distancing.

Hickey cataloged the public activity of celebrities by studying news articles, celebrities’ social media accounts, and other sources. When celebrities made donations, spoke out about politics or the pandemic, or posted about current events on their social media channels, Hickey took note.

“Anything that they did and gained attention for, negative or positive, we tracked,” Hickey says.

Then, she assisted Deflem with analyzing the data. Hickey says her research showed that many celebrities were speaking out on issues as a way of keeping their names in front of fans.

“Logan was involved not only with the data collection, but eventually also with the analysis of our gathered data, which involve many thousands of news sources and social media messages," he says. “Logan was a very diligent worker, never missed an assignment, and could increasingly work independently.”

Hickey says that her confidence grew because she stepped out of her comfort zone.

Originally from North Carolina, Hickey plans to move to Atlanta to work in the film industry this summer. Then, she wants to explore careers that can use her sociology background in creative ways, ranging from real estate to recruiting.

Although her college experience turned out to be far different than she expected, it’s been a learning opportunity that prepared her for the future, she says.

“I am most proud of my accomplishment to stay true to who I am as a person. When at times I questioned my worth, my character, and my direction, I did not give up on myself, and for that, I am proud.” 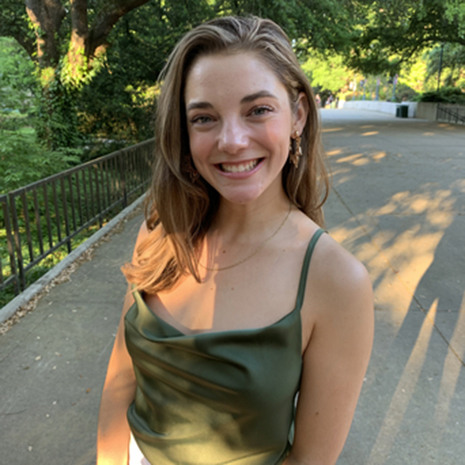 After changing majors a few times, Logan Hickey finally discovered her love for sociology. That led to her work as a research assistant, which helped prove her potential to herself.