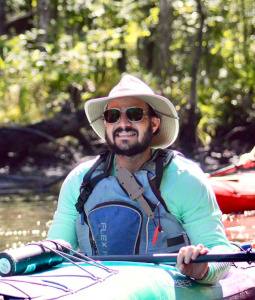 Jay Grant’s family are Gamecocks. His grandmother graduated from UofSC in 1942, and his family has been enjoying football weekends in Columbia as season ticket holders since 1952. When he enrolled at South Carolina, he followed his interest in science by becoming a biological sciences major, initially thinking that he would pursue a career in forensics.

His career focus changed dramatically when he started doing undergraduate research with Dr. Jeff Dudycha. Jay’s research required field work that took him to the Congaree National Park to collect Daphnia, or water fleas, from the various ponds in the park. Getting outside and collecting samples for his research made him realize that he could pursue his love of the outdoors as a profession.

After graduating from UofSC in 2009, he earned a Master’s in Biology from the Citadel and followed that up by becoming a South Carolina Master Naturalist. All his experiences led him to becoming a tour guide for Nature Adventures Outfitters, giving kayak tours in the Lowcountry. After many years of guiding, he now owns the business! He credits his field work as an undergraduate for giving him the skills to better deal with the natural world. What do you do when you are waist deep in a pond collecting water samples and find yourself a yard away from a cottonmouth? You read the snake’s body language and back away slowly. He also credits a public speaking class at UofSC with helping improve his communications skills, which he uses when guiding tours.

How are you using your biological sciences degree? Let us know at biologyalumni@mailbox.sc.edu.