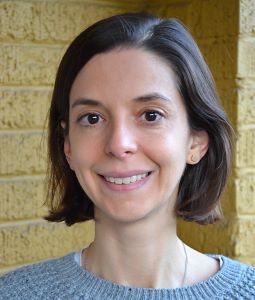 How do organisms generate complex structures? This is a question that excites Carolyn Wessinger, Ph.D., an assistant professor in the Department of Biological Sciences. To answer this question, Dr. Wessinger is identifying variations in genes that result in variations in flower shape among the Penstemon family.

Mutations in DNA result in genetic variations that can change the appearance of an organism. There are multiple ways that a species of plant can acquire the genetic variants that result in a different flower shape. One way is that the mutations occurred randomly, and each species of hummingbird favored Penstemon evolved independently. Another way is that the mutation occurred in one species and the genetic variant moves from one species to another through hybridization, where two closely-related species can produce viable offspring. To determine if these or other mechanisms occurred in the Penstemon family, Dr. Wessinger and her students are taking DNA samples from closely related Penstemon species found in the western United States and sequencing the genomes to identify genetic variants. By applying bioinformatic tests, Dr. Wessinger and her students will determine which mechanism is more likely to have occurred in Penstemon.

Understanding how organisms, like Penstemon, develop complex structures, like flowers, and how those structures can change is a fundamental question in biology, and determining the mechanism in Penstemon will be applicable to all species, including humans. Dr. Wessinger’s research program has received grants from both the National Science Foundation and the National Institutes of Health. Read more about her humming bird research or visit the Wessinger Lab website to learn about her other research projects.