To understand University of South Carolina biological sciences assistant professor Carolyn Wessinger’s research, you need to know about the birds and the bees.

Once upon a time, many species in the wildflower genus Penstemon bloomed with short, wide spikes of bright bluish-purple flowers. The flowers attracted bees, who stuffed their stocky bodies in between the petals to reach the nectar inside and spread the pollen when they flew away.

But somewhere over the course of evolutionary time — thousands to millions of years, Wessinger says — 40 Penstemon species changed. Bluish flowers turned bright crimson and produced more nectar. Compact petals stretched into deep, droopy tubes. The plants evolved — but their adaptations made them less attractive to bees, who didn’t have room to land on the flowers and couldn’t even see the flowers to begin with.

I love field work. I just love being out there looking at these plants.

But the new traits lured a new pollinator: hummingbirds, who needed the surplus nectar to fuel their hyperactive metabolisms. Their slender beaks could reach the nectar at the base of the petals. And, because hummingbirds hover while they feed, they didn’t need a place to land.

The lineages have evolved so frequently and so consistently that researchers have come up with a name for it.

“We call it the hummingbird syndrome,” she says.

Understanding hummingbird syndrome goes beyond satisfying a scientific curiosity. The basic question of her research — What is the source of the genetic variation for adaptation? — could uncover clues about whether and how quickly species might evolve new traits to adapt to environmental changes, such as those caused by climate change.

“Understanding constraints on the process of evolutionary change — even in this group of wildflowers that doesn't have direct economic importance — can be really important for making some broader generalizations, when put in the context of findings from other study systems,” she says. 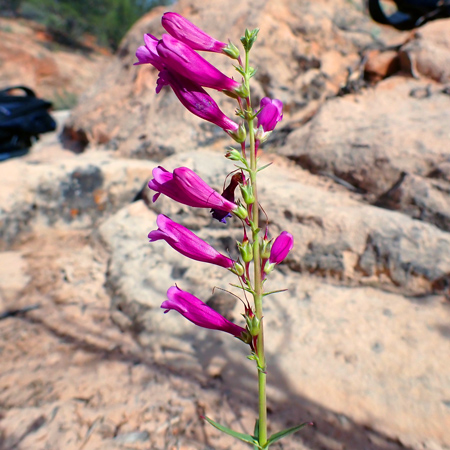 Over the course of evolutionary time, 40 Penstemon species changed from having bluish flowers to having bright crimson flowers that produced more nectar. Compact petals stretched into deep, droopy tubes.

Wessinger has studied the Penstemon’s flight from bee pollination to hummingbird pollination for years to deepen the understanding of convergent evolution — essentially, how different species independently evolve similar features to adapt to similar necessities. In June, Wessinger and her research group were awarded a five-year grant from the National Science Foundation to continue that research. Wessinger earned grants from the NSF as a doctoral student and a post-doc researcher, but the June grant is her first grant as a principal investigator.

So far, Wessinger’s research has yielded fascinating findings. The repeated shifts from purple flowers to red ones, Wessinger says, involves a loss of function. The gene that controls the enzyme steps to produce the purple pigment is inactivated in some way.

“So that means that you can basically mess up the genes that produce purple flowers and you end up with a red flower,” Wessinger says. Effectively, she adds, it’s natural selection in action — and it can be an especially helpful short-term strategy if a Penstemon flower needs to change pollinators.

But Wessinger also found that swapping pollinators can stunt species diversity. Once a branch of the Penstemon family tree switches to hummingbird pollination, the evolution of new species on that branch slows or stops. And Wessinger’s research suggests that Penstemon species that change pollinators can’t go back. She has some ideas why this might be: It could be impossible to reactivate genes once they’ve been deactivated, she reasons, or it could be a matter of ecology.

Either way, there’s a lot left to learn. Wessinger has a good grasp on how flower color changed, but she’s less sure about the genetics behind changes in flower shape and nectar production. There are also questions about introgression — when species transfer genetic information back and forth through hybridization. If, in fact, hybridization has resulted in hummingbird-pollinated traits moving between lineages, Wessinger says, then scientists can make predictions about how natural selection acts on those plants in real time.

“One basic question we have as evolutionary biologists is whether the repeated evolution of a given trait — this phenomenon of convergent evolution — really involves new mutations in each lineage, or whether perhaps that trait evolved in one lineage but was transferred to a new lineage through a process of interspecies hybridization, which can be pretty common in plants,” Wessinger says. “And so that's the focus of this grant, to assess whether this process of hybridization between different lineages has contributed to this pattern of convergent evolution.”

Understanding constraints on the process of evolutionary change ... can be really important for making some broader generalizations.

Penstemon is an ideal avenue for studying evolutionary change, Wessinger says, because the wildflowers have ditched bees for hummingbirds so many times, leaving a large data pool to draw from. Wessinger’s current research focuses on naturally occurring hybrid Penstemon populations on the state line separating Utah and Arizona, some 20 miles south of Zion Canyon.

Over the next few years, Wessinger and her team will hike those lands, collect hybrid wildflower samples and bring them back to the lab for genome sequencing to determine how much genetic material comes from each parent. They’ll also log phenotypic data and photograph flowers and analyze their spectral reflectance data to understand how different pollinators might view those flowers.

Analyzing all that data is exciting, Wessinger says, and leads her closer to cracking the hummingbird syndrome code. But for Wessinger, the search is as exciting as the discovery.

“I love field work,” she says. “I just love being out there looking at these plants.”