During the search for Charlesfort along the southern shoreline of Parris Island in 1989, the Martime Research Division scoured Means Creek with a magnetometer and visual reconnaisance to locate evidence the French fortification. A number of magnetic anomalies were investigated and revealed only modern debris, primarily metal flare casings associated with the Marine Corps night training. Visual inspection along the shoreline also did not uncover clues to the presence of the French fort. Since that time, Charlesfort has been discovered under the remains of the first Spanish fort at Santa Elena following further analysis of the cermic assemblage and archaeological features conducted by Drs. Stanley South and Chester DePratter. In addition to the 1989 survey for the fort, the MRD conducted a survey off the mouth of Means Creek in the Beaufort River for the 16th century corsair, Le Prince, lost in Port Royal Sound in 1577. 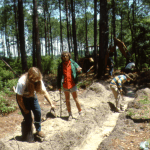