Jotaka Eaddy has long been recognized as a leader.

While earning her political science degree, she was the first black woman to be elected Student Body President in University of South Carolina history. She works in civil rights advocacy and helps "bridge the gap between Silicon Valley and Washington, D.C."

She started a movement with the social media hashtag “WinWithBlackWomen” that reached hundreds of millions of impressions.

Eaddy now brings this movement home to South Carolina through Coming Full Circle, a new series that will bring dynamic Black women leaders to speak on campus in partnership with the College of Arts and Sciences.

Their conversation explored Staley’s childhood and growth into a history-making athlete and coach as well as the impact of Staley’s advocacy work. 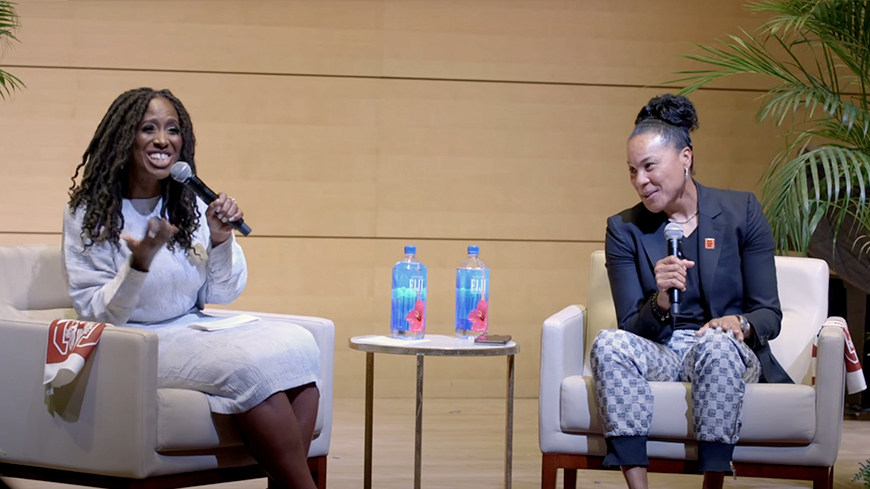 Staley grew up as the youngest of five children in what she describes as “a row-house in the projects” in Philadelphia, Pennsylvania. While some didn’t appreciate her drive to excel at sports, which defied their expectations for what girls should do, Staley says all she wanted to do was win.

“Sports was the only thing that moved me,” she says. “It was something divine in my life that led me to where I am now.”

As a child, she had two goals: to win an Olympic medal and to win a National Championship. Her talent and hard work brought her to the University of Virginia, to the WNBA and to the U.S. Olympic team.

She won Olympic gold three times as a player, twice as an assistant coach and once as a head coach. Under her leadership, the Gamecock Women’s Basketball team has won the National Championship title twice.

Eaddy, in listing these accomplishments, is not the first to add this description of Staley: Greatest Of All Time.

Eaddy asks Staley to share about her outlook as a coach. She’s known as a “player’s coach” who looks out for the interests of her team, as a group and as individuals.

Staley says she has made it a point to support and advocate for all her players, no matter how many minutes they play or how many points they score.

“As coaches, we are servants for our players,” she says. “The hardest part of being a coach is making sure that each player feels like they are part of the team.”

Staley puts great effort into mentoring and guiding her players as people.

Some of them, like Staley, are first-generation college students, and Staley recognizes the importance of this generational change to their households.

“It’s come full circle, for me,” says Staley of her role as a mentor of young women following in her footsteps. “But the circle is not complete: it’s still ongoing.”

Staley’s advocacy work extends beyond her role as a mentor and coach. She has created an organization called Innersole to provide new sneakers to children in South Carolina.

The organization has given away more than thirty-thousand pairs of shoes.

To help inspire elementary school students to excel, Staley started a program called “Educate My Sole,” a friendly competition for classes to meet academic, fitness, behavioral and other benchmarks for success. The prize: brand new sneakers.

“As a kid, I did not care what I looked like from the ankles up,” Staley jokes. “Where I lived, a new pair of sneakers were the thing.”

In addition to helping young people follow in her footsteps, Staley uses her platform to speak out about national and international issues.

Eaddy and Staley share a mission to raise awareness about the detainment of WNBA player Brittney Griner in a Russian prison.

“There’s nothing she can do to get out,” Staley says, “Even if you don’t agree with her views or her choices, [Griner] is a human being and she’s an American.”

Eaddy asks Staley to describe what it means for her to have a platform as a successful black woman.

“I can only be who I am,” Staley says. “I just want to help move the world to a better place.”

The next Coming Full Circle event will be announced at a later date. Follow the College of Arts and Sciences on social media to be among the first to know.