UofSC sets the stage for Midsummer Shakespeare in Washington, D.C.

Gamecocks are behind the scenes and on stage this summer for a groundbreaking Shakespeare performance in Washington, D.C.

The Folger Shakespeare Library is performing A Midsummer Night's Dream at the National Building Museum in July and August. These performances are the world premiere of the Shakespeare Festival Stage, the creation of UofSC Theatre and Dance chair Jim Hunter.

“The Shakespeare Festival Stage Project is a modular and portable outdoor performance stage inspired by the layout and functions of Shakespeare's Globe with a contemporary revisioning,” Hunter says.

In addition to Hunter’s design work, the show includes a theatre alumnus in the cast and a few current students in roles behind the scenes

The play’s assistant director is M.F.A. student Cat Thomas, and two other theater students are shadowing the production team. John Floyd (2015 B.A., Theatre) is on the stage playing Flute, a member of a group featured in the comical “Pyramus and Thisbe” scene.

Midsummer is Floyd’s fifth show with the Folger Theater. In fact, he calls the Folger his “theatre home” in D.C. His first experience at the Folger was seeing their 2014 Richard III performance, which was produced in partnership with UofSC, and he quickly got involved with the production company when he moved to the area.

“I am very happy that as an alumnus, I can represent UofSC continuously here,” Floyd says. “As we have gone through rehearsals these couple of weeks, it’s been great having a UofSC presence with Jim Hunter and Cat Thomas helping bring our story to life!”

Thomas has worked for more than two years on the Shakespeare Festival Stage project.  After the project received funding from the UofSC Excellence Initiative in 2019, the onset of the COVID-19 pandemic postponed the intended launch date. Thomas says it’s gratifying to see the project come together.

Timelapse of 'The Playhouse' festival stage at the National Building Museum 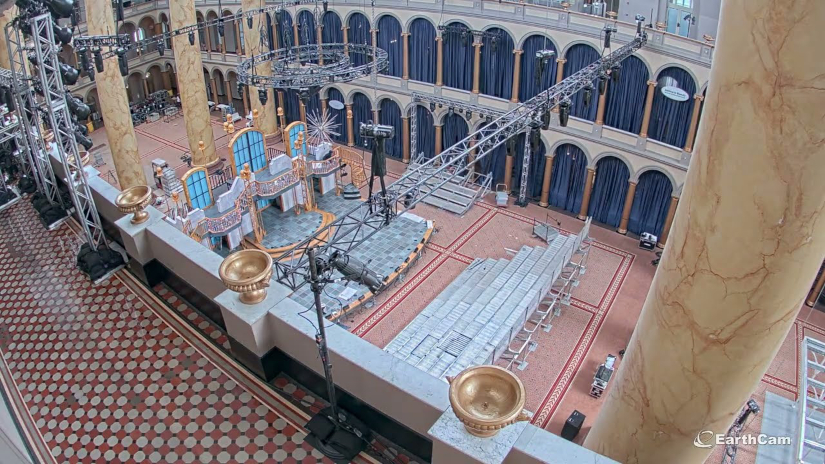 “I didn't realize how monumental it was until I got to D.C. for the first day of rehearsal,” she says. “Everyone from the Folger Library staff, to the directing team, to the design team, to the actors were all humbled and honored to be embarking on such a legendary project together.”

After the performances in the nation's capital, the Shakespeare Festival Stage will be shipped to Columbia, where it will be reassembled for outdoor performances of A Midsummer Night’s Dream on campus. Eventually, the stage will travel throughout South Carolina to bring the Shakespearean experience to audiences statewide.

The news site DCist went on site for a local perspective on UofSC’s Shakespeare Festival Stage.  Read it here.